This was the last run of the TNF Run Series and the most challenging as it was almost 95% trail.  Despite injuring his 2nd metatarsal of his left foot, Tekko still managed to drive Molly, Brokie and me to the starting point of the run.  Besides him, Kayano was also struck down by a nasty bite that had him hospitalised for a few days, while Alvin had to be a responsible Brother to his good friend's wedding ceremony this very morning too.  So the official Ocean 9 Lead Runners was down to Ocean 6 Lead Runners for the Jul's TNF run, with Terence and Brokie leading. After giving his instructions to all the runners, Terence led the way while I tried to stay on pace in the middle.  It was a cool morning.  A perfect morning to either sleep in or to get out into the nature for a trail run.  :) 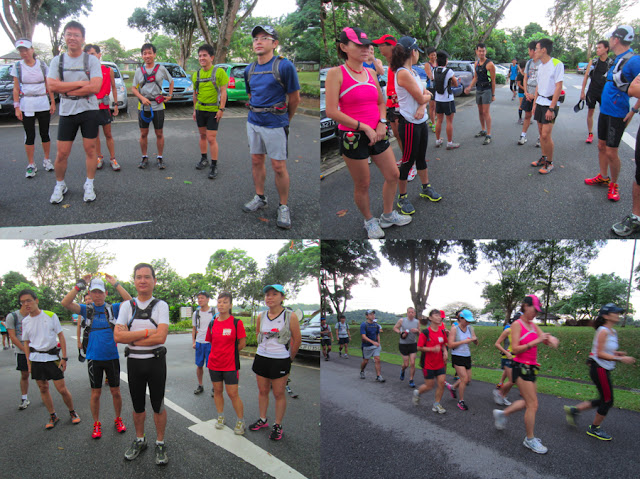 I felt difficult to run at first as I just recovered from a high fever 2 days earlier.  My legs felt sluggish and heavy.  As it rained yesterday and last night, the ground in the trail was wet and muddy.  It was a stop-start-run especially as we tried to avoid running into the puddles of water as well as avoiding the roots.  There was a part where runners have to climb over or go under the fallen tree trunk.  Luckily, some kind soul dissect the middle section of the fallen trunks for two other trees further up.  :p  There were also a few streams to cross:  one with a rope for you to hold on to, one with 2 thin trunks for you to balance and cross, and one last one with some branches and stones for you to step on.  Surprisingly, the flower pot which was there last week, was gone!  So we had to execute a perfect jump.  I found my rhythm soon and managed to keep up the pace with the runner in front of me.  Our first photo shot was further up at the "4 Stones" and Brokie, our reliable RSM as always, gave out precise and clear instructions for everyone to fall-in for the group photo.  :) 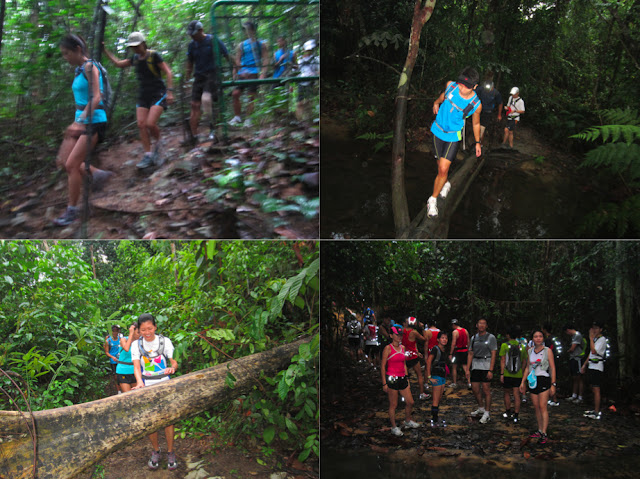 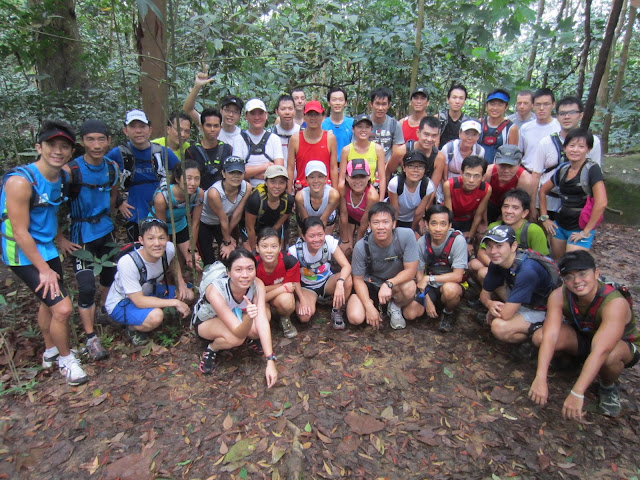 First Photo Shot @ 4 Stones
After leaving 4 Stones, I decided to cover rear as it was easier to run as compared to running in the middle, where I tend to feel that people behind you seemed to be chasing you down.  I also took some photos for Shu Ming who didn't come for the recce last week.  We soon came out to an opening but went into the trail further up for a short loop inside in the trail before coming out again for our second photo shot at the S Curve (who said only the driving circuit got the famous S curve)!  :) 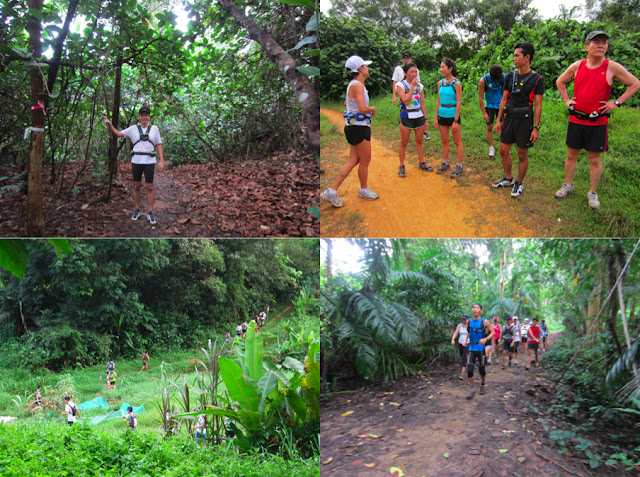 In And Out Of The Trail 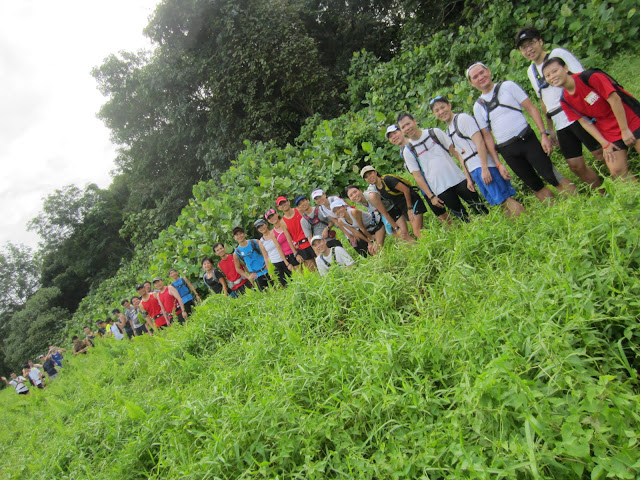 Second Photo Shot @ S Curve
After the S Curve section, it was time to go back.  I took the lead for the first time today but stopped at an appropriate place to take some action photos of the runners.  They turned out satisfactory to me.  It was also my opportunity to fall back to the rear again.  And I was happily following a lady wearing a DBS red color shirt, with John behind.  The trail seemed to get even more muddy by then, although my North Face Rucky Chucky was still pretty dry.  Shu Ming, who was running not far in front of us, kept saying aloud that his shoes were still very dry and I offered him a chance to get them wet.  He soon disappeared! 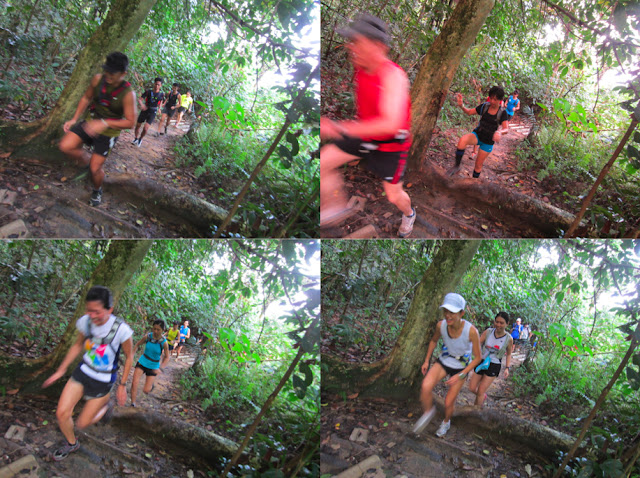 Action Shot of Runners
Someone (Amy) remarked if we were on the right track.  I assured her yes, as we just crossed a stream.  I landed awkwardly twice but on different foot.  So I was still able to run, unlike another runner in grey shirt who twisted his ankle 3 times on the same foot.  He had to walk back by then, accompanied by his friend.  Luckily, we were very near the entrance / exit to the Woodcutter's Trail.  John and I waited for both of them while Molly and the rest ran back to the carpark.  Once they emerged from the trail, we own time own target ran back to the finishing point at the carpark.  Total distance covered was almost 14km.  At the carpark, Karen and Carey gave out promotional sample of GU Gel and Penguin Sports Wash.  This was the best TNF Run Series and the most memorable one.  Thanks to TNF, I made many new friends and explore many new trails in Singapore.  I hope next year there would be another TNF Run Series and that Ocean 9 Run Leaders would continue to meet up to explore the rest of the unexplored trails.  :)

P.S. Special thanks to our guest run leader, Kops, for leading us during the recce run last week as well as the actual run.