Gun Time: 5hrs 10mins 43secs. Chip Time: 5hrs 7mins 41secs.
The result of my latest marathon outing in Rome was totally unexpected. Seriously. I was feeling rather nervous in the morning, as with all my previous races. An aquintance commented that since I had done so many marathons before, I should not feel nervous. BUT, I had never done a marathon twice (less the Singapore Marathon which I did in 2001, 2004 and 2006) so I should entitled to feeling excited and nervous.

The morning was great. The wind was light and the air was cool. I took the metro and stopped at the Circo Massimo Station as instructed. Then I walked for about 1km to the start point. There were many people depositing their baggages and doing warm-ups. Most are chatting happily away but I couldn't make a sense of what they are talking about. The atmosphere was great and everyone were jumping, waving and shouting when the event helicopter hovered just above us. The event started at exactly 0900hrs. I took my own sweet time to run and only passed the official start point about 3 mins after the whistle blew.

For the 1st hour, the run was difficult in the beginning as I had a hard time running the first 4km due to the cobblestone surface. The ground were uneven and tough. Luckily for me, I was able to pick up the paces when the cobblestone led me onto tarmac road. It was also at the 4km mark that we saw the elite runners running past us. Most of us clapped to acknowledge their feat.

For the 2nd hour, I covered another 9km. 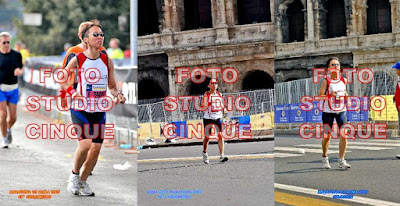