It was a glorious morning today. The weather was perfect to do a LSD. But, I woke up late due to late doses of live EPL games the previous day so I decided to go to California to run instead. Packed my gear and left. Then I received a call from Renoh. He said Tiwazz and Astrogirl were running around the stadium area so I could meet them if I were early. I think here think there, decided to detour to BG instead. Hmmm. Sometimes, I could be very fickle-minded.

When I reached there, they already finished their run and were washing up. The last person being Charlotte cos she ran extra miles. Met some new SGRunners like Petia, Yakman and Asturias105, but I missed Eugene_Ng8 cos he had prior engagement with his family. Glad that I turned up at BG afterall. It was also good to see Astrogirl running too. She had a luckless year in 2006 after injuring herself during KLIM - think so but can't confirm.

After having our prata, Renoh and I went to check out the new California Fitness Branch @ Velocity, Novena. We took a bus from Bukit Timah together with Petia, Asturias105 and Roonz. After alighting at Newton, Roonz lead the way from Newton Circus to Novena! If not for the company, I would never walk so far!!! Petia parted company with us at Novena as he's on his way to Thomson. The 4 of us then went to Running Lab and Asturias got some gel. Renoh also tried out a "L"-size tri-top. :p Renoh and I did not manage to convince Roonz and Asturias105 to join us for the workout at California. So we went ahead instead.

Boy... The Novena Branch is really tiny... Although it did have 3 levels, the floor area is small. I went for my run while Renoh went to pump iron. Did 7km in 55mins with a MHR of 170. (Starting speed was 8km/hr and in the last 10mins, the speed was increased gradually for every 0.2km/hr to reach 9km/hr max). Wow, it's a very tiring effort for me. And it's been a very long time that I'm able to sustain at this speed! I reckoned that I need at least 3 weeks of continuous running at this speed every other day to get back my basic fitness. :(

After my run, I did the following strength training exercises:

Meanwhile, also met Boon Seng (BoSe) at the gym too. After our workout, we took the MRT to The Cathay and rewarded ourselves with popcorn, coke (Renoh was more health consious and chose Ice Lemon Tea) and Pan's Labyrinth. It was a satisfying weekend for me. 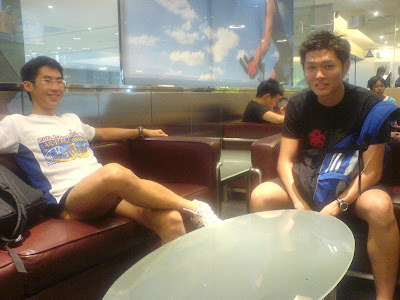 Hey Ripley, thanks for the popcorn and the coke. :) It was indeed a very nice outing. Hope to be able to join you guys for weekend run soon.