I took part in the above event this afternoon at Temasek Polytechnic. The flag-off for the Women's categories was at 4.20pm, followed by the men. It was not a particular hot day but it felt very hot and humid to me. I put on my running gear after I reached the stadium. 2 of my team-mates were already there - LK and YC. I also saw Bug, DreamRunner, Hedgehog and BabyMonster. As advised by my SGRunners' Ultraman sifu, I warmed up by running the 400m track twice. Then I joined my team-mates YL, LK and YC at the starting point. We were made to wait for another 10mins as the volunteers were not in their respective positions yet... By the time the race was ready to start, I already cool down!!!
As soon as the race started, I was pushed to run at a faster pace as everyone else was jostling to go past one another. I managed sustain this faster pace till only the 1.5km mark. I felt like vomitting out my lunch as I had a late lunch at 2pm. By then, I really punctured and slowed down considerably. Even before I reached the 2km marker, some of the men already overtaken me and I also lost track of my team-mates too. "Siao liao" - I thought to myself.
Nevertheless, I had to continue. I stopped twice to pick up water and poured them over my head and arms. The return journey was slightly better. There was wind and slightly more shady. DreamRunner ran past me just before I turned into the polytechnic. By then, I picked up the pace but still not too fast enough to run past anyone. Once I was on the track, I gave myself one last push and managed to overtake 4 women. Even an old man (he looked like in his 50s) who paced with me towards the end said "good pace, good pace". I was rather "lao kwee" and chiong to the finishing point and almost, die-ed. 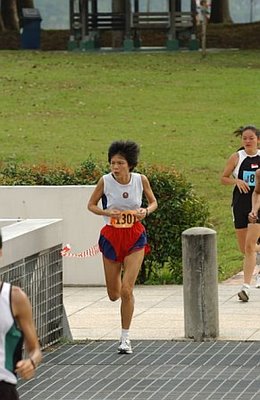 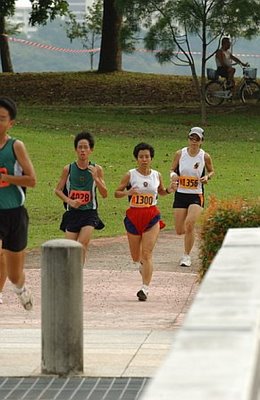 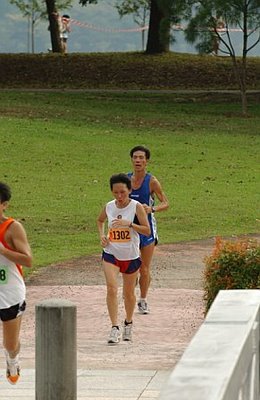 Well, as predicted, I came back a few seconds off the 40mins timing according to my polar watch. Next year, I will and must trained seriously. Despite being the youngest in my team, I was also the slowest. Very embarassing. YL was placed 1st (26:54) in the Public Service Category (meant only for public servant). My other friend LK got 5th (28mins plus) while YC was 14th (30mins plus). This meant our team won the Women Veteran's event in the Public Service Category with a winning 20 points (lowest points accumulated), 4 points better than the runners-up who accumulated a total of 24 points. All in all, I enjoyed myself although I must admit I could have better prepared myself for the event. Next year then. Hopefully my team-mates would still consider me for their team. :) 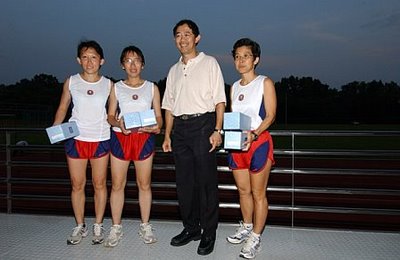