It was a rather rash decision to sign up for the MR25 Ultramarathon 2014 but I decided to do so nonetheless as I wanted to use this as a workout to recover from the Dapeng New Year Marathon exertion 2 days earlier.  I had done this race 3 times previously.  In fact, I embarked on my ultramarathon journey by completing my first MR25 Ultramarathon back in 2006 where I completed 6 laps.  I improved to completing 7 laps in 2007 while my last race was in 2008 when I completed the minimum of 5 laps.  Probably due to my weak mind, I had not been taking part in the race since then.  The big difference then and now, besides the obvious rise in cost of registration, was the availability of finisher medal and chip timing.  Other than that, the same old uncles that helped out back in 2006 were still doing the same job now.  Plus a few more volunteers.  :)

On race day, I packed simple with just a few gels, a bottle of sports drink and my trusted Ultimate Direction Jenny's Collection - Ultra Vesta, a hydration made specifically for women.  At the start, I met up with Wendy, whom I met through Trail Running Singapore.  After depositing our personal belongings in the MR locker, we walked to the start, which was just slightly further up than the previous start/end point.  This meant that other regular users of the park would not be blocked, neither would the runners be blocked by them.  I met some long-time friends from the SGRunners.com era - Shortlegs (Seivland), Roentgen (Lionel), Taz (Yong Wei), and Teelee (Tee Lee), who were also running the race. Then organisers flagged us off at 7:00am sharp. 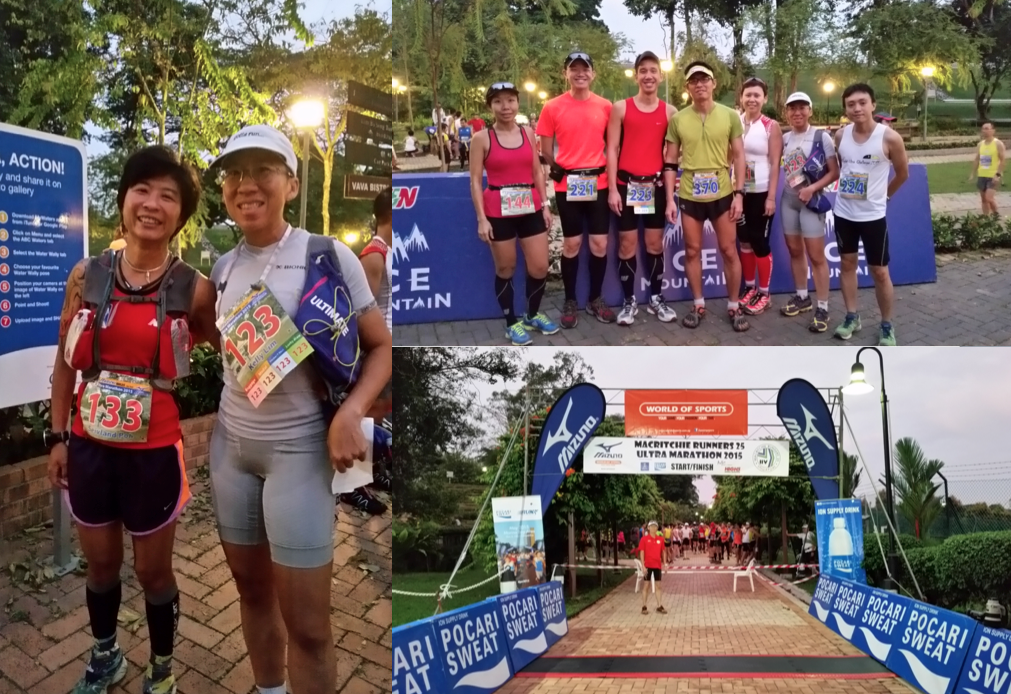 Before The Start Of MR25 Ultramarathon 2014!

All along, my plan was simple: to do 5 loops and complete the race within the 12 hours cut-off.  I knew this was achievable based on my previous experience.  I was conscious not to commit the mistake of running too fast.  Perhaps the fall during my Shen Zhen trip helped in a way since I was still feeling bruise from the fall rather than from the marathon itself.  It also helped in that I was not wearing my Garmin Fenix even though I knew the time if I were to check on my cellphone.  Even so, I still felt surprised when I completed the first loop in 1hr 36mins.  It was not a fast loop but I thought I would have completed in around 1hr 40mins.  I text Elise of my progress as she was supposed to pace me for my 4th and 5th loops.  I took a gel, walked to the trail head and continued my 2nd loop.  Loop 1: 1hr 36mins (Total Time: 1hr 36mins) 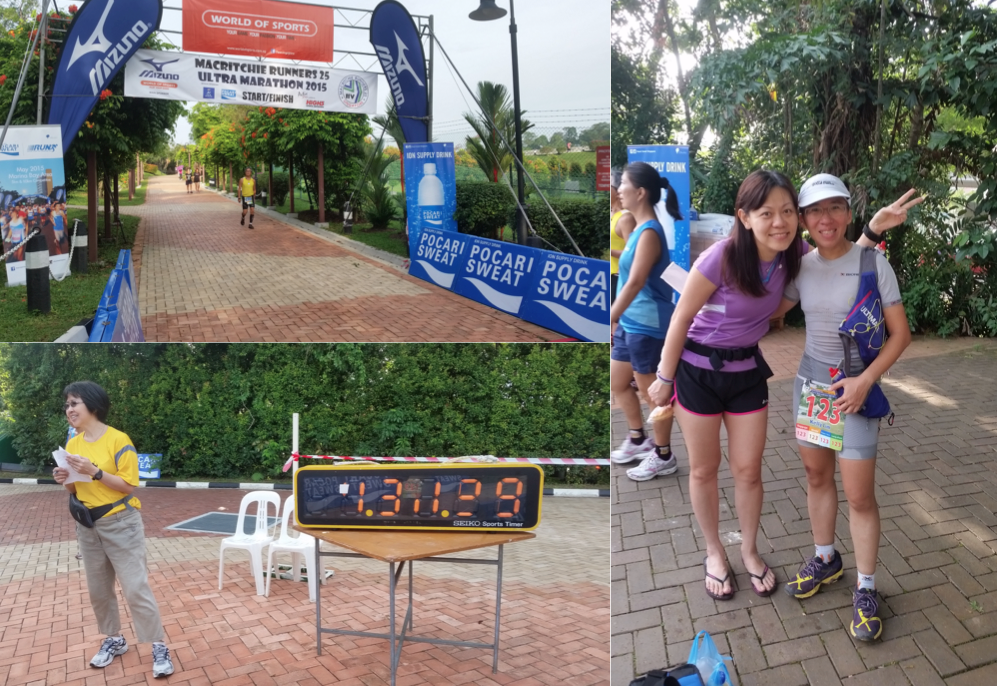 By the second loop, the runners were pretty spread out.  Even so, the trail was still rather crowded as there were other hikers and runners.  Unfortunately, not everyone had the same trail etiquette which could be rather annoying when you were running in a race.  The weather was also very kind - it was not as hot as it could be in Singapore.  At the end of the northern trail, just before the 1st water point, I almost tripped while going down the gentle descend.  A runner in front shout out to me to be careful.  I took his advice and go slow on all the downhills even if they were not steep at all.  I couldn't imagine if I had fallen while my wound on the right knee was still not completely healed.  I completed the 2nd loop in 1hr 37mins!  Again, I updated Elise and she was worried she might not make it in time for my 4th loop.  I told her not to worry and just come whenever she was done with her kids.  Loop 2: 1hr 37mins (Total Time: 3hrs 13mins) 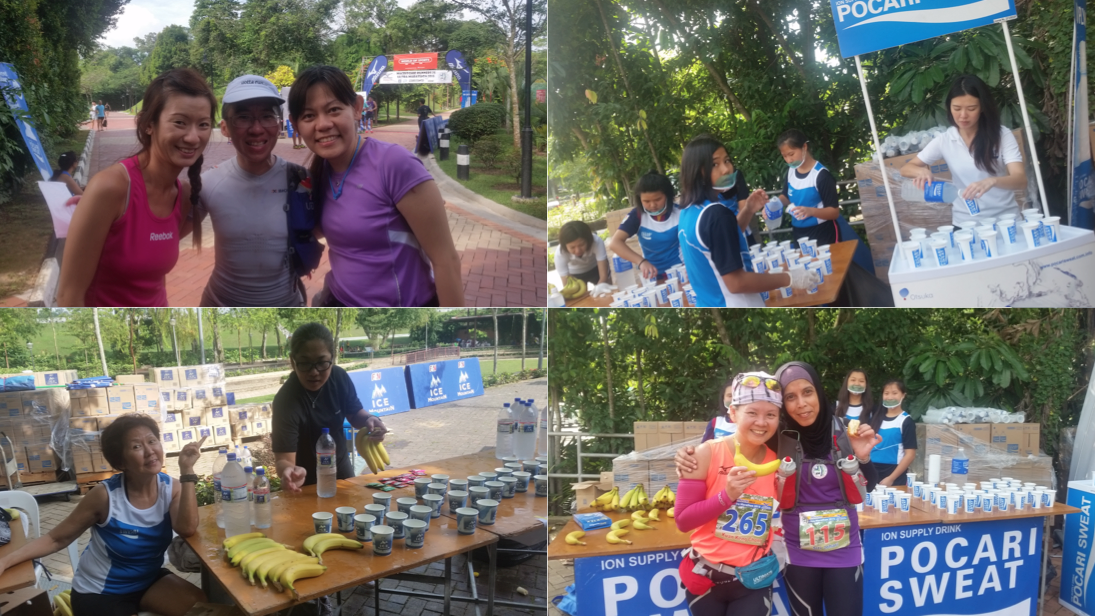 I knew I had to slow down and I did.  For my 3rd loop, I ran/walked for all the upslopes (except for the two upslopes after the fitness corner near the end of each loop as I loved running both that segments).  I also spent some time both the water points to talk to the volunteers.  At the first water point, it was manned by Yuji and his wife Chikako.  I first met Yuji through SGRunners.com and he was a competitive runner.  In recent years, he had been helping out to man the water point for MR25 Ultramarathon, which was very nice.  After chatting with his wife, I learned that their daughter was currently studying overseas and their black dog had since died of old age which made me kind of sad.  I thanked them as they would be handing over the pm shift to someone else before continuing my race.  At the 2nd water point, next to the fitness corner, I chatted with the volunteers there while messaging Elise that I would reach the Amenities Centre in 20mins, which I did.  The 3rd loop was completed in 1hr 52mins!  Loop 3: 1hr 52mins (Total Time: 5hrs 5mins) 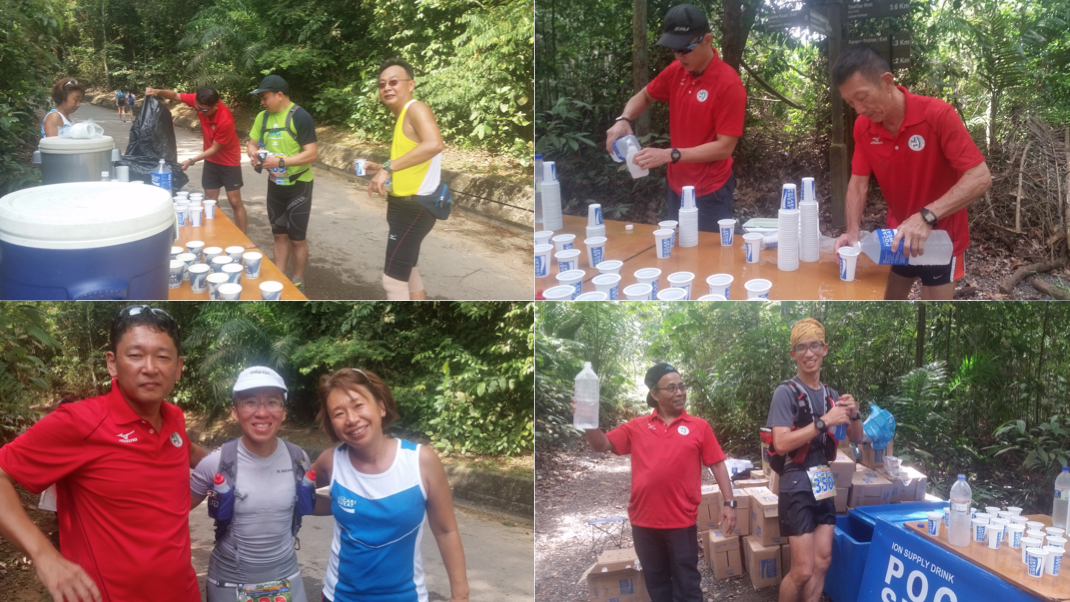 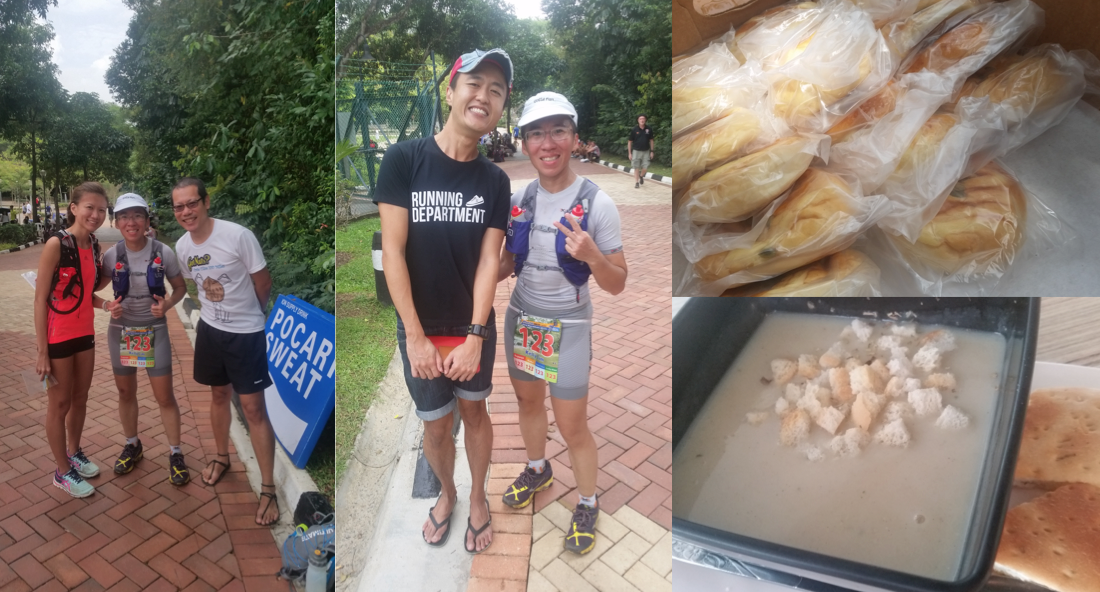 I met Elise at the Amenities Centre at 12:20pm and she bought a bowl of mushroom soup for lunch.  It tasted much better as compared to the buns and bananas given by the race organiser as I craved something salty.  At around 12:40pm, it was time to get going after a rather long pit-stop.  This was also a chance to do catching up with her, as well as on her sons and daughters.  She always made me felt I was going fast even though we were of the same speed, which was good in a race.  Sometimes, she would run ahead of me to clear the trail and other times, she let me go ahead, whenever she sensed my momentum.  But she never let me ran it too easy, reminding that she had to be back on time to feed Victoria.  :(  So I knew I had to do my part.  Just exiting the trail, I met Raudhah and took some coke from her.  It was refreshing!  Loop 4 was completed in 2hrs 21mins, including 35mins of break-time!  Loop 4: 2hrs 21mins (Total Time: 7hrs 26mins) 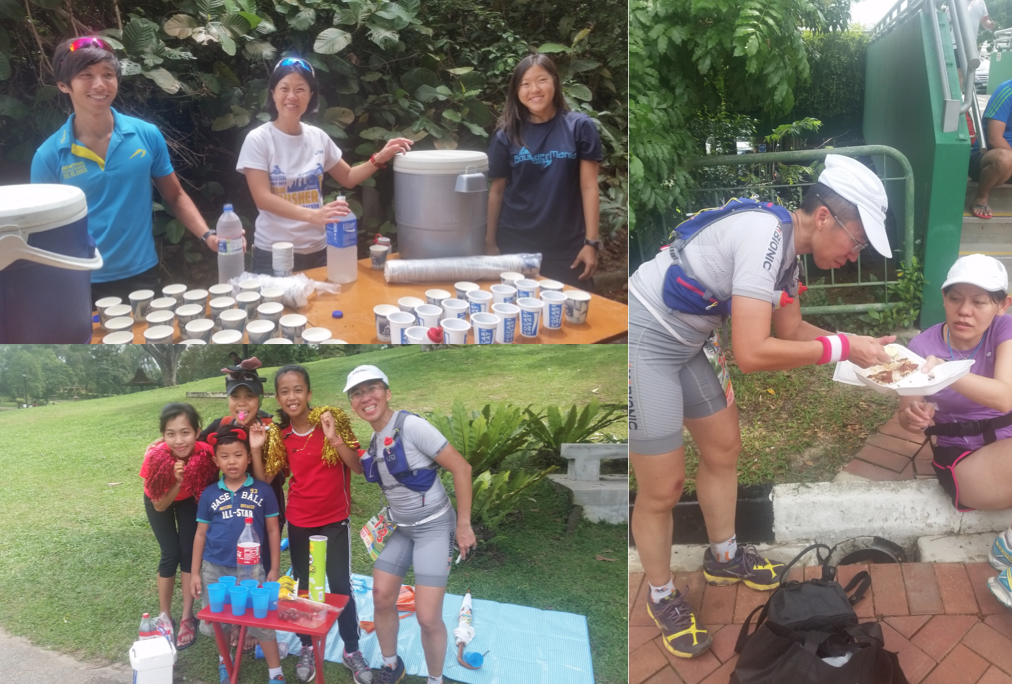 En Route To Completion of Loop 4!

We took a short break and walked to the trail head after I had finished the iced milo that Elise bought for me  For loop 5, Elise had a surprise for me but she didn't tell until we were after the half way point through the loop.  As I was on target to finish by 4:45pm (It was initially 5:00pm but since she said she had to feed Victoria, she set a 4:45pm target for me), she set me a new target of completing the 5 loops by 4:30pm.  She said this was reasonable since I looked and ran strong for loop 4.  So my hope of a easy loop 5 was literally dashed.  :(  I jogged/walked the upslopes, maintaining a consistent pace.  But I wasn't sure if I could make the 4:30pm deadline set by her.  Nevertheless, Elise never told me my progress throughout.  Instead, she assured me of my ability and reminded to have faith in myself.  After the second water point, I decided to push myself a little harder and completed loop 5 at 4:16pm!  This meant Elise had time to wash up, go home and feed Victoria!     Loop 5: 1hr 50mins (Total Time: 9hrs 16mins) 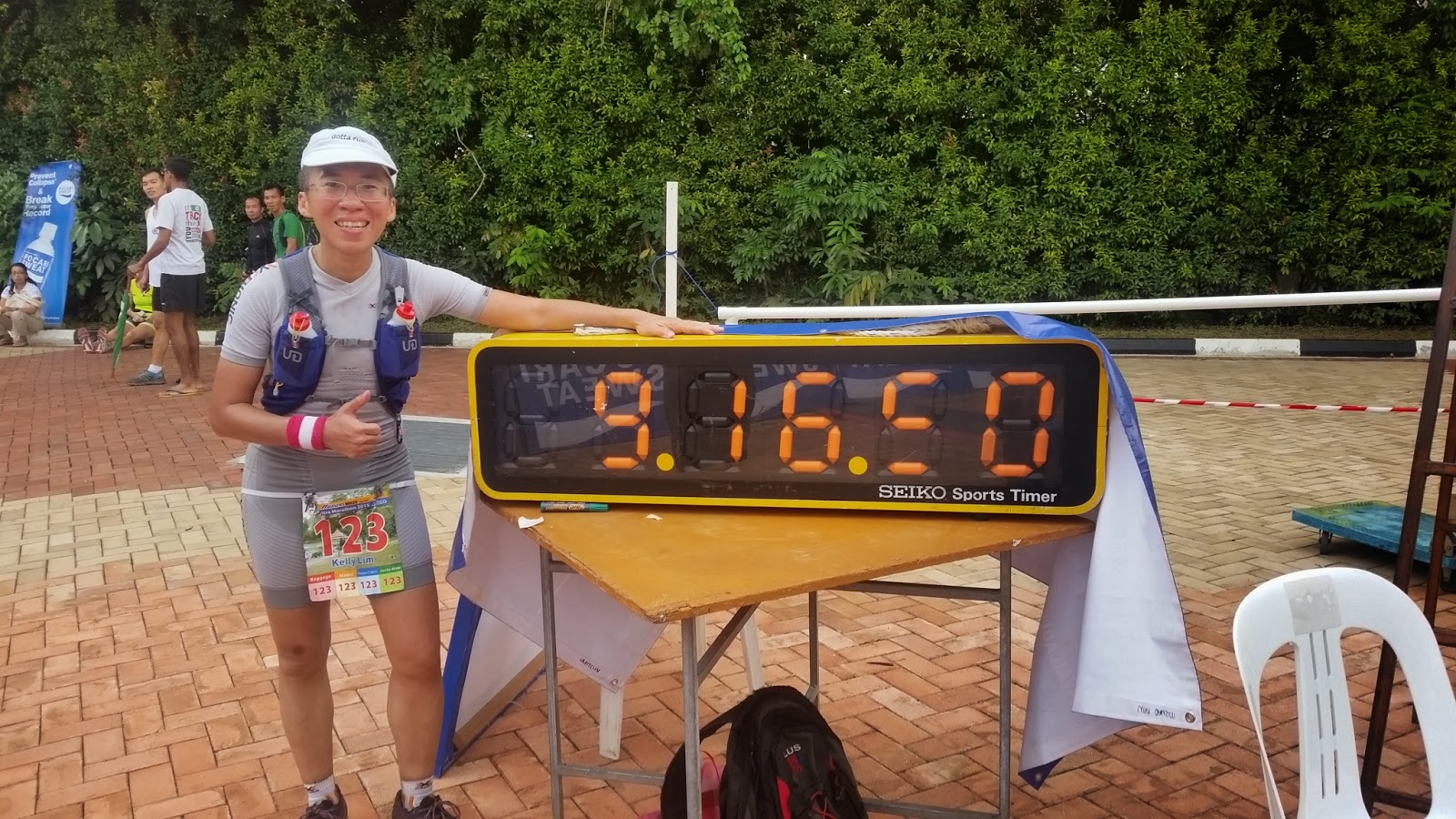 Overall, it was a great race experience, and special thanks to the race organisers, official volunteers, friends supporting other runners and especially Elise.  Without her faith in me, her constant encouragement (and sometimes nagging), I wouldn't have completed the MR25 strongly.  It was not my fastest race but it gave me great confident to tackle the Cross Country Marathon (organised by the same group of runners) which has a cut-off time of 7 hours.  Though MR25 Ultramarathon is not a must-do race, it is definitely a race where I could use as a training run given that I had limited resources to plan for a LSD and a weak mind.  Next up is the Yoma Yangon Marathon in a week's time!
Posted by Ripley Runs at 12:44 AM