This would be the first race for me in 2015 - on New Year's Day no less.  I first got to know about this race from 老菜, who lives in the city of 深圳 (Shen Zhen).  I met 老菜 back in Lantau, Hong Kong, at CP1 of the TransLantau 100km race last March.  We both DNFed the race (he had a recurrence of an old injury while I sprained my right ankle 8km into the race) and were waiting for organiser's vehicle to take us to the start/end point with one other injured runner.  It was a long wait and 老菜 decided to walk out to the main road to get a cab instead.  He was extremely kind to get the cab driver to drive back to CP1 to pick up the rest of the injured runners, including me.  After the race, we kept in touch through WeChat and he regularly updated me on the various races happening in China.  And so, I decided I would do the 大鹏新年马拉松 on New Year Day.  :)  Registration for the race was piece of cake with 老菜 around.  It really saved me time and effort.  Also, registration fee cost a mere 100RMB (equivalent to around S$23.00). 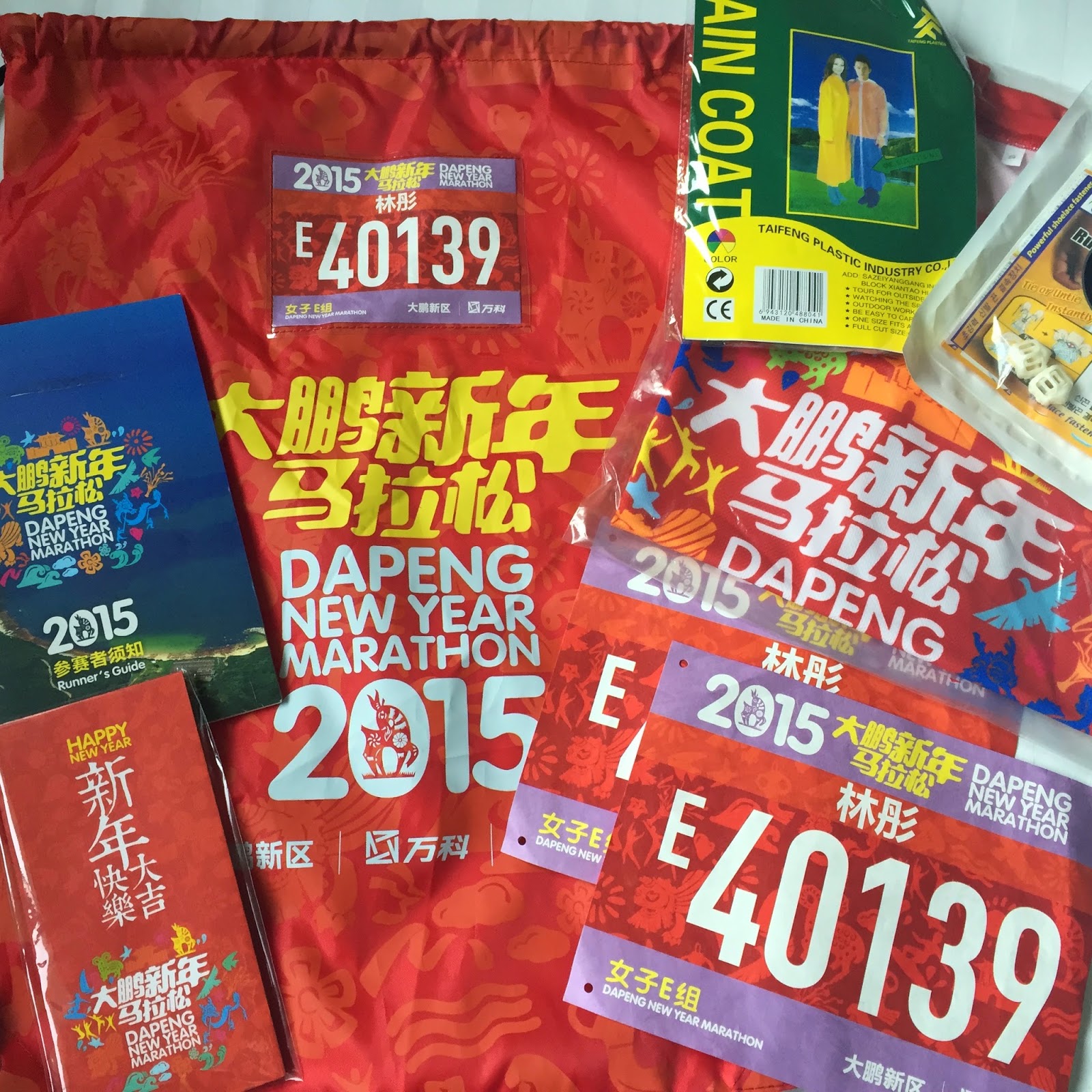 Flight time from Singapore to Shen Zhen was about 4 hours.  From the airport, I followed 老菜's instruction and took the Airport Bus No. 10 to the city where he and his friend would pick me up.  The bus fare cost 7RMB (about S$1.55) but the journey was rather long - about 1hr 30mins due to the congestion on New Year's Eve.  The drive to Dapeng (大鹏) was another 1hr 30mins.  By the time we reached Dapeng, 老菜's friend dropped us off before leaving for his hotel at another location.  I was totally exhausted.  Luckily, I was only running a full marathon the next day.  After checking into the hotel, I went out with 老菜 for carbo-loading dinner with two of his friends who had just arrived to pick up their race packets from him.  I learnt that 大鹏 is one of the oldest district with the smallest population in Shen Zhen.  Near the place of dinner, there was a old place where old building structures are largely preserved although the fixtures and fittings looked modern.  There was an old-fashion inn like those in the olden time swordplay movies.  It was like stepping back in time. 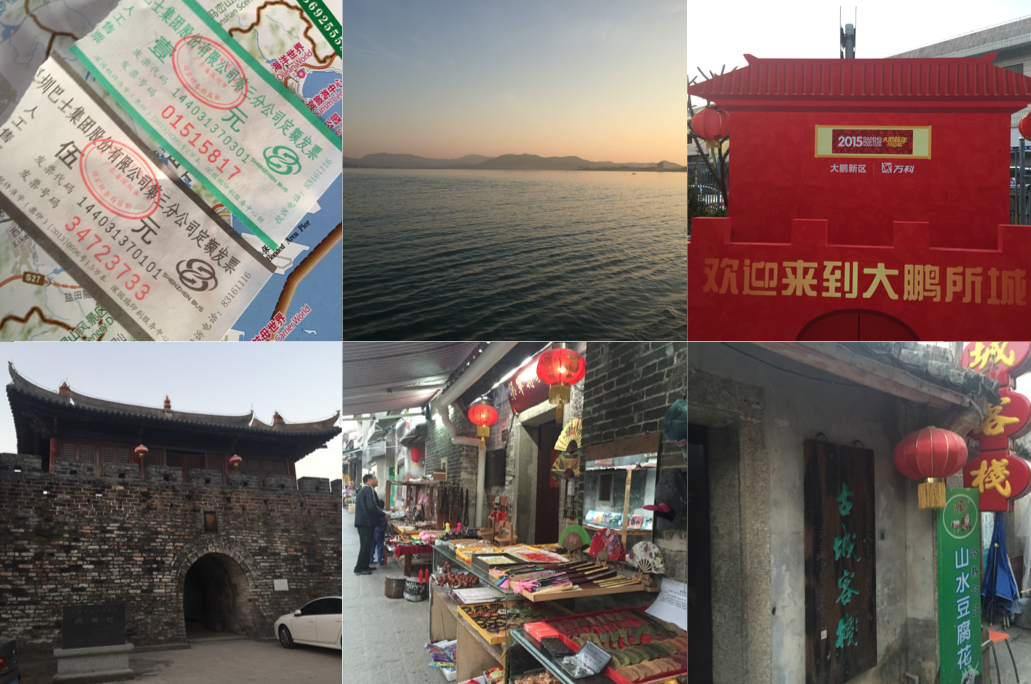 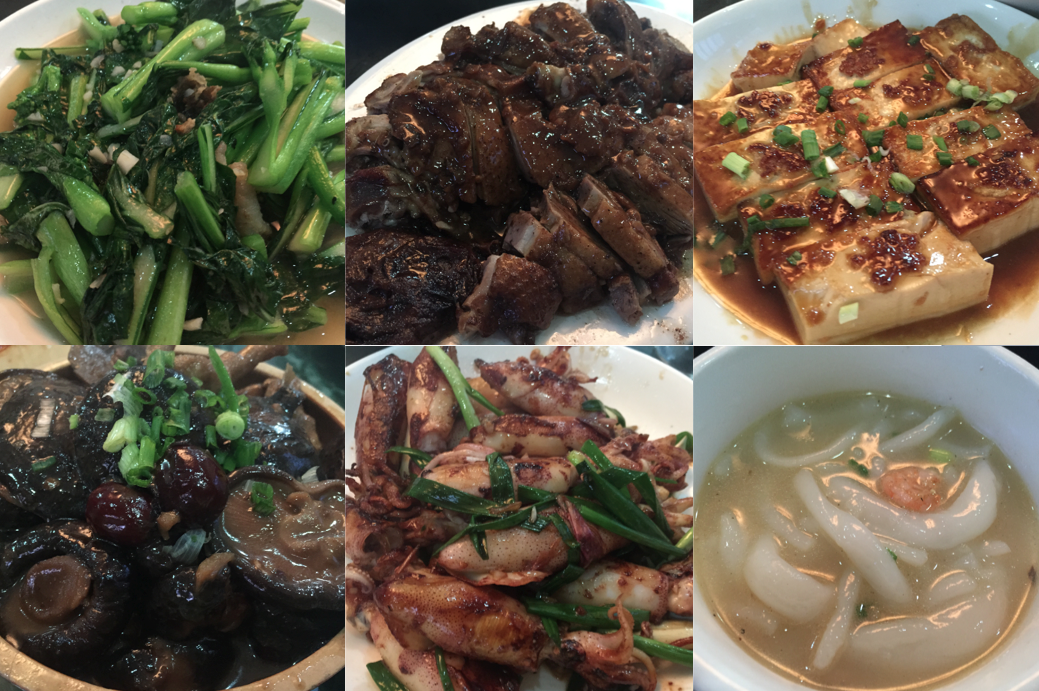 On race day morning, we took the bus provided for the runners free-of-charge near our hotel to the race start at 5:20am, which was approximately 10~15km away.  The weather was a little cool at 12 degree Celsius.  I was glad that I listened to 老菜 and put on the poncho that was included in our race packet.  While the poncho did not keep me warm, at least it served its purpose to keep wind out.  I felt much better once I was on board the bus and away from the wind.  The entire journey took less than 20 minutes for the bus to reach the starting line.  I didn't feel like getting off the bus as it was rather windy.  Luckily, there was a male and female changing tent and I joined a few other ladies to hide inside.  With the race not starting until 7:30am, I even had time to nap for about an hour or so till 7:10am.  Then I slowly dragged myself out of the tent for some warm-up and stretching exercises.  At 7:30am sharp, the race organiser flagged us off.  As soon as I started running, my body warm up fast enough and I was all system go. 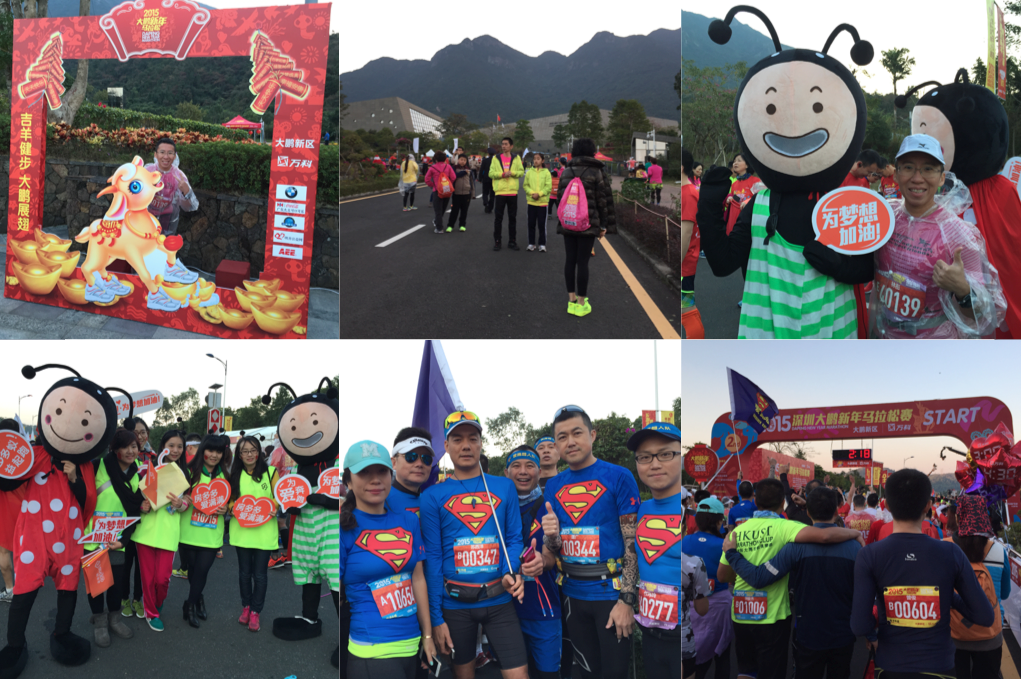 Photos Taken At The Starting Point!

Aid Station Support
The elevation for the race was almost flat with a slight incline from the 33km (10m) mark and peaking at the 38km (70m) mark.  The aid stations for the marathon were stationed at every 2.5km apart, starting from the 5km mark.  Water was served at all the aid stations while sports drinks and wet sponges were made available at alternate aid stations.  Washrooms were also made available (either using the public toilets or providing mobile toilets) near all the aid stations, while vaseline, bananas and salt tablets (yes, they even gave out salt tablet) were provided at the 25km and 35km marks.  The water and food were plenty, except for the 25km marker where they ran out of bananas for the slow runners.  I wasn't affected as I carried my own gels.  :)  Volunteers at the aid stations were very proactive and helpful. 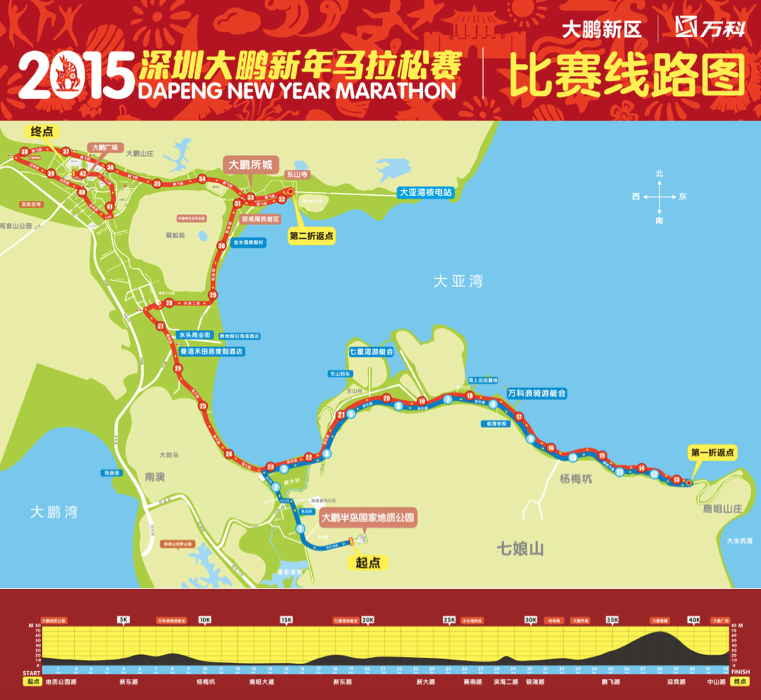 Marathon Route
The race started at the 大鹏半岛国家地质公园 (some kind of park) entrance.  We ran away from the park entrance on the main road before the route lead us back into (probably) the same park from another entrance where the open sea appeared on our left.  It was rather scenic although those who were scared of cold would find it too chilly due to the strong wind.  There were very few spectators here and there, which was not surprising given that Dapeng was a small town and had the smallest population in Shen Zhen.  Supporters of the race tried their best to drum up the atmosphere by shouting words of encouragement, blowing the whistle, or waving their pom pom.  One must really gave it to the ladies who braved the windy condition wearing only sleeveless dress in heels.  :s 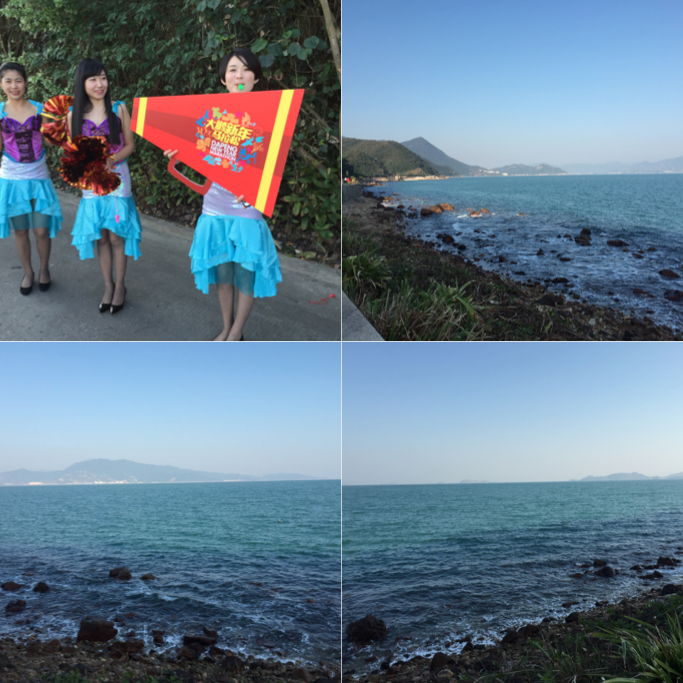 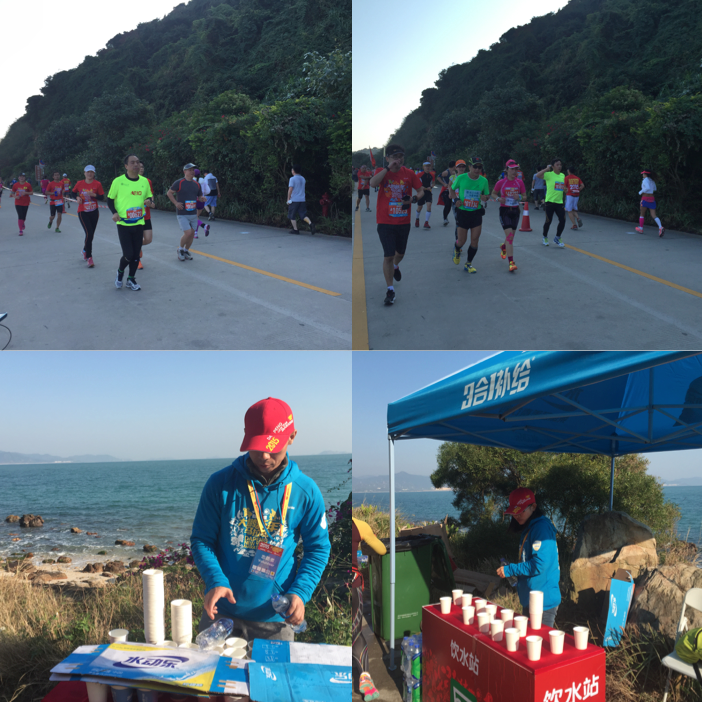 Runners and Volunteers Along the Course!

Race Review & After Thoughts
As for my own race, due to the lack of speed training, I wasn't able to get into any fast rhythm.  I did maintain my pace in the first 24km, which I averaged approximately 8km an hour.  Just before the 28km mark, I felt unwell.  Luckily there was a mobile toilet not far ahead and I managed to sort out my stomach problem.  I was relieved that I could continue but after a few more kilometers, I felt unwell again.  This time, going to the toilet didn't help as I had not digested what I had ate earlier.  I decided to walk-and-jog and see if my condition improved.  Now, back near the town, there were more supporters clapping and cheering for us.  I decided to run but felt the urge to go to the toilet.  After another fruitless trip, I concluded that my stomachache (or bruise) could be due to the impact fall the day earlier and not due to what I ate during the marathon.  I worried if I should push myself to run, I might fell apart.  But I decided to knuckle down and run as far as I could as long as the pain was endurable.  The thought about missing my flight was a good motivation.

By then, the sun was high up in the sky and the weather was getting hot.  Back in the town centre, I saw 老菜 standing in front of our hotel.  He told me that the finishing line was just round the corner (although I knew I still had another 2km plus to go).  From then on, I kept pushing myself.  After I past the 42km mark, I saw the finishing clock but just as I wanted to sprint to the finish, I felt a twitch in my right calf.  It was as though my right calf was giving up on me and cramping up was the signal that it could attract my attention.  I got the signal and limped across the finish line in a timing of 5hrs 37mins.  It was not a fantastic timing but I was happy to have completed a marathon on New Year Day.  The race volunteers at the finishing line gave me my medal and a jacket to keep warm.  Our hotel was just round the corner and it took me less than 20mins to walk back.  After washing up and packing, I thanked 老菜 and apologized that I was unable to join them for lunch due to my flight schedule.  He gave me some instructions to get back to Shen Zhen city centre.

It was just past 2pm when I went back to the finishing line to get my race certificate.  Unfortunately, the queue was still very long.  I knew that taking the bus back to the Shen Zhen city centre was more important and started to look for the queue.  But there were many buses parking on both sides of the road!  After asking around, I managed to find a bus that was about to move off.  I quickly asked the volunteer who was standing next to the bus if I could get on.  (There were buses for volunteers and buses for runners, and apparently, you couldn't board the bus for the volunteer if you were a runner and vice versa).  Looking pitiful and trying to explain the urgency to get back to Shen Zhen city centre did the trick though I was still worried about the traffic.  Luck again was on my side as the traffic was fairly smooth and I managed to arrive in the city after 1hr 30mins on the bus!  A short MTR ride (about 8 stops from the Shen Zhen University) followed by the airport bus allowed me to arrive at the airport just in time for checking-in.

All-in-all, it was a great experience and good workout running in Dapeng.  It also allowed me to burn off whatever I ate over the festive holiday a week earlier.  I would strongly recommend this race to anyone who wish to set a running goal as there would be no better way to set your goal for the year by actually running a marathon on New Year Day!  But be sure to check the traveling time from the location of the race to airport as not all locations for races are in close proximity like in Singapore.  :p 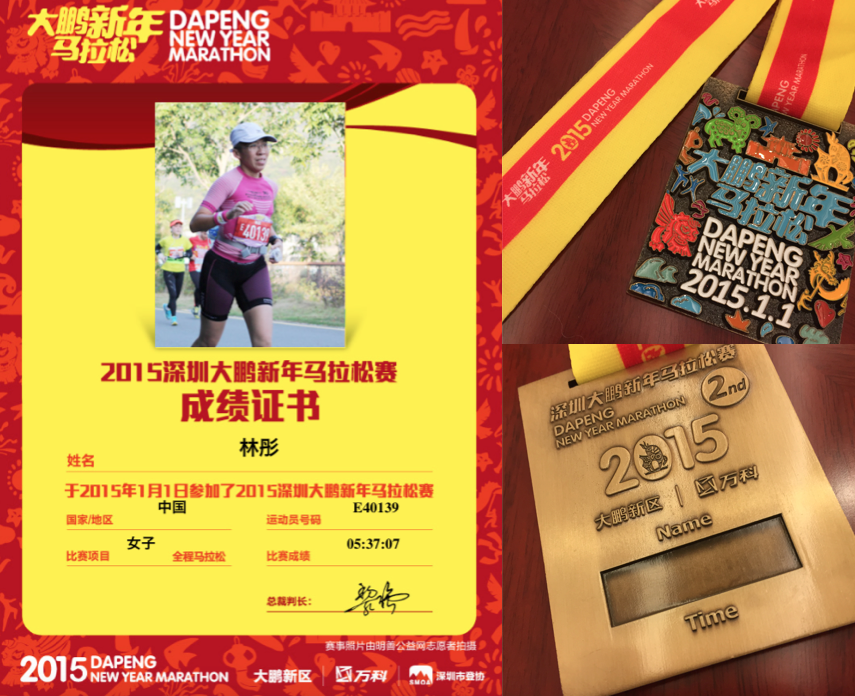