I met up with a good friend for a run last weekend and was amazed that she didn't wear her usual The North Face running gear.  :p  Instead, Karen was wearing this white color, short-sleeved tee with a "The Ultimate Race For Cancer Research - 3 Jun 2012" red wordings printed on it.  Out of curiosity, I asked her what race would she be running on 3 Jun 2012.  Her reply was "You going to some overseas country in Jun, right?  What race was that?"  Comrades Marathon!  She remembered I would be going to South Africa for Comrades on 3 Jun!  Karen then told me how she got the tee and the person (Frank Chong from Kuala Lumpur, Malaysia) who was doing the charity project.  As I would be attempting for my 4th Comrades this year, I thought why not help Frank on his charity project.  Details of the fund raiser, as well as the charity project are below: 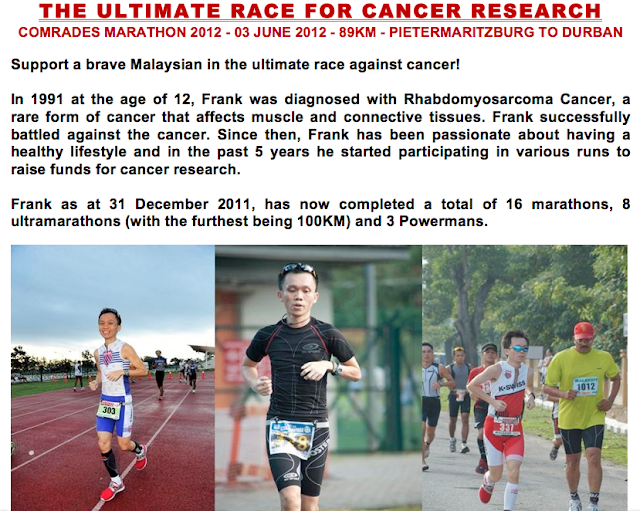 Bio Data of Frank and his Accomplishment

Recently, Frank had qualified as one of the 2 Malaysians for the world's largest and oldest 90km ultramarathon race called Comrades Marathon, taking place on 3 June 2012 in South Africa.  The race requires participants to complete the run in 12 hours, with a number of cut-off points along the routes which runners must reached by a prescribed time or be forced to retire from the race.  The objective of the race is to commemorate the South African soldiers killed during World War I.  Comrades was run for the first time on 24 May 1921 (Empire Day), and with the exception of a break during World War II, it has been run every year since.  To date, over 300,000 runners have completed in the race.  For more information about Comrades, you can visit Comrades Marathon.

Frank is eager in giving back to the society, particularly for cancer patients.  An example is the Terry Fox Foundation where he helped to raise fund that will benefit the foundation in the continuous research towards battling the disease.  In order to further his involvement in this, Frank intends to run the Comrades Marathon for a good cause and benefiting CARIF - CAncer Research Initiatives Foundation.  And since I would be returning to South Africa to run Comrades too, I might as well lend him a helping hand in his fund raising efforts.  Hence, if you believe in Frank and me, please join the CARIF - Frank "The Ultimate Race for Cancer Research" Campaign.  You can pledge your support towards the campaign through the following ways:

1) Purchase the "special edition" t-shirts at RM60 or SGD30 each.  The tees are available at CARIF and Running Lab, Tropicana City Mall.

You can also view Frank's updates on his race preparation recorded on his personal blog - Runnerz Circle....  For those residing in Singapore and is interested in purchasing the special edition tee, which is made of VaporSkin micro-fiber mesh and designed by 2ndskin (2ndskin is actually the company and brand that helped design the shirt), you can leave a comment at the end of this blog entry and I will get in touch with you.  The last date of ordering is 30 Apr 2012 with the estimated delivery (pickup) by 31 May 2012 (latest).  The sizing of the tee is as shown below: 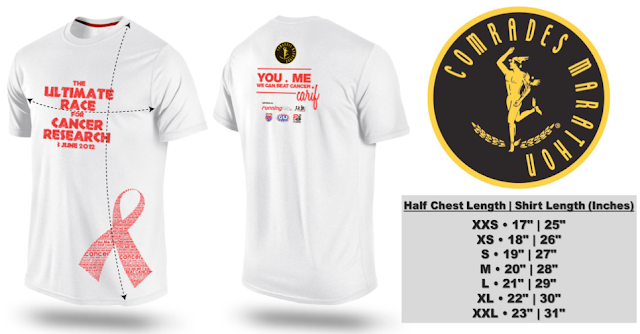 Hi Kelly, I would like to get a Ultimate Race for Cancer Research tee. I consider myself an average runner and you and your blog has been an inspiration to me. I hope to challenge 100km one day! Hope to hear from you soon. :)

Hi there, okie. Can you email to me at kellylim22@gmail.com? I'm glad that I could inspire people to run and keep fit. :)

hi Leafster (aka David)... have not heard from you with regards to your tee-shirt size yet... please email to me soon... :)