Race Intro
I first heard of this race on Facebook and I was immediately intrigued as it was an all-women ultramarathon!  The "1st All-Women Ultra Marathon (AWUM) 50km" run was organised by the Cebu Ultra Runners Club (CURC) and Ungo Runners, which would start from the Ayala Active Zone and end at a beach resort in Lapu-Lapu City.  The race coincided with the International Women's Day in March and the organiser's intend was to use the race to promote women empowerment, and at the same time, for the men to show their support to all women participating in the run.  :)  I loved all-women races mainly because I dislike men squeezing against me at the start of races and during the races.  :p  Since I had never been to Cebu City, and the cost of registration was an affordable US$20.00 for overseas runners, I decided this would be a must-do race for me this year.  The other important factor was the starting of the race at 10pm!  I loved running when the sun was no longer around, so I paid up while on another running trip to Philippines in January and had been looking forward to the race since.  :) 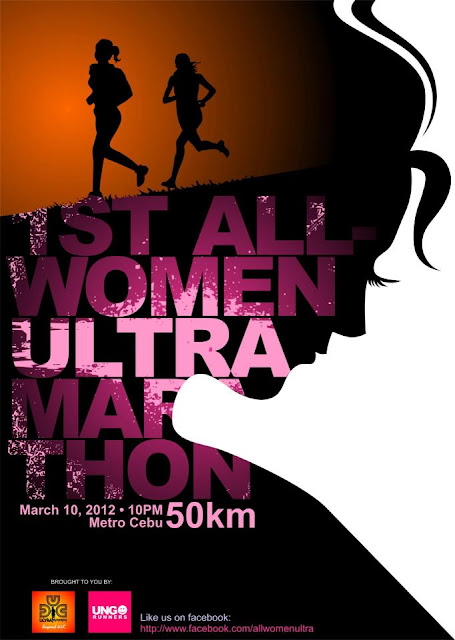 Pre Race
Chantel decided to join me for the race although she would be flying there a day earlier on Friday.  Both of us were unable to attend the race briefing held few days prior to race day.  So Jacob (the race organiser) offered to get another fellow organiser, Tony, to send our race packets to our hotel!  It was an extremely nice gesture and I doubt there would be a race where overseas runners were so pampered.  :p  I reached Cebu on Saturday around 9am.  After breakfast, I took a 2-hour nap.  As Cebu's weather was somewhat like Singapore (Chantel claimed it was much hotter), we decided to take a quick lunch at a nearby fastfood outlet before going back to the hotel for more rest!  At about 4pm, both of us were awoken from our sleep - Tony was here at the hotel's lobby with our race packs!  Both of us went down to meet him.   Tony also explained the key points (safety and minor changes to route) highlighted during the race brief before he left.  As we were still rather full, I bought a bun instead of having a full dinner meal.  Then, we got our stuff ready before going back for more sleep.  But I was too excited to sleep well while Chantel was battling with her stomach upset.  By 9pm, we decided it was time to leave for the Ayala Active Zone to check ourselves in for the race. 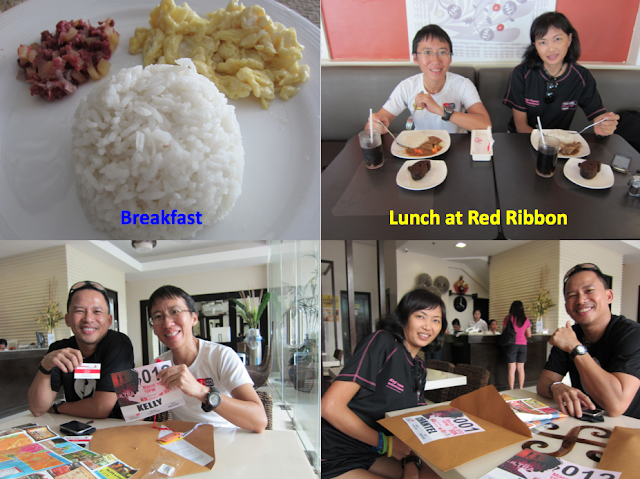 All Women Ultra Marathon - The Race
The Ayala Active Zone was vibrant with many runners and supporters!  The race organisers did a final briefing before gathering all the runners at the starting line for a mass photoshoot.  I bumped into Napoleon, a talented runner whom I first met in the Hong Kong Vibram 100km last year (and who also did the TNF100 Philippines and Sundown Ultramarathon 100km), and Merlita, an extremely fast runner from Philippines whom I met in 2010's TNF100 Philippines.  At about 9.59pm, with the countdown timer moving closer and closer to 0:00, the race organisers got everyone at the race countdown for a 10pm blast. 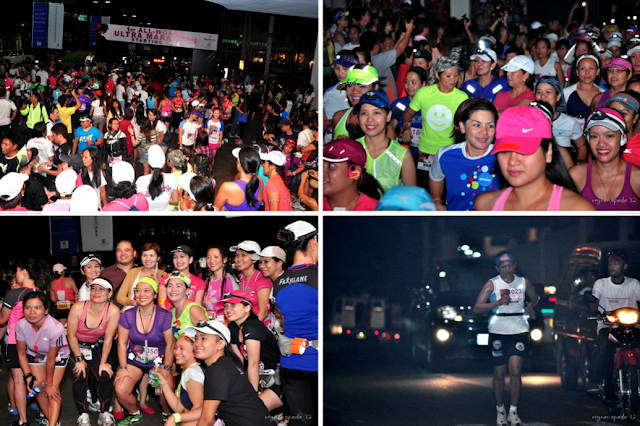 For the first 1~2km, we were running on the right side of the lane before finding ourselves running near the centre divider with light traffic on the right lane.  Not sure why we weren't running on the side of the road but I just followed the front runners.  :p  Luckily, we were directed to the side after a major traffic junction.  I kept looking out for Chantel, hoping to see her following me as she still wasn't feeling too good.  After a few upslopes sections, I lost sight of her.  :(  Then I saw Merlita zoomed past on the opposite side of the road!  She was fast while I just plodded along, probably because she was going downhill while I was still going uphill.  Soon, I saw the u-turn and aid station.  I took a banana before picking up the pace going downhill.  Then I saw Chantel on the other side of the road.  She said that depending on how she felt, she might not press on.  And that's the last time I saw her on the course.  I decided that I would do a slow run and not push myself too hard, since this was not my key race.  As long as I could complete it by 6am, before the sun came out, I would be satisfied.  The aid stations at every 5km came soon, one after another, all well-stocked with drinks and food. :) At some of the aid stations, even before I arrived, there would be a volunteer encouraging me and running with me for the next 50m or so.  Then a few of them would ask me what I like to eat or drink.  Some would ask, "chocolate? banana? water?" etc.  I was overwhelmed by their kindness and enthusiasm. 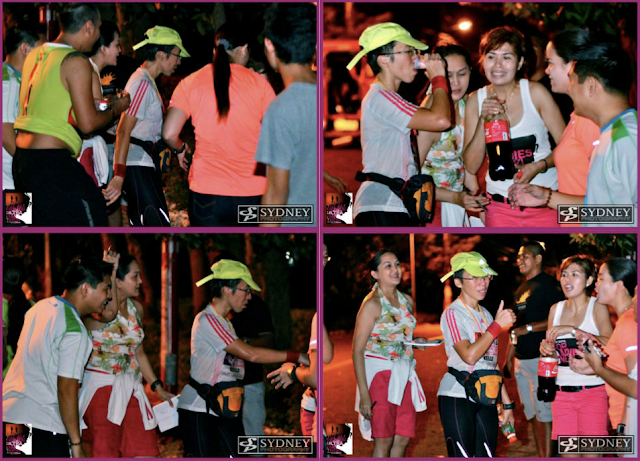 I found myself running alone most of the time, which I rather enjoyed.  There were marshallers at critical junctions when you need to make a turn.  Roving marshallers could also be seen (on bicycles and vehicles) prowling along the route.  As we moved away from the city centre and further into the night, there were fewer and fewer people on the streets, although there were still a small crowd whenever I ran past some karaoke pubs.  Soon, I had to make a right turn somewhere around the 20-something km mark.  I began to enjoy more when I knew I would be going up and over the bridge.  Somehow, I loved running gentle uphill.  I had to put in more effort but corresponding, I could slow down.  Near the top of the bridge, I ran past a runner.  Chatted with her for a while before I signalled her to run downhill together.  But she didn't follow.  Near the end of the bridge, a marshaller instructed me to make a right turn, without taking the stairs.  I reached the next aid station that served water melon!  It was refreshing and I took 2 pieces of it as I had not been eating since the banana at the 5km aid station.  I saw another lady in front and tried to keep pace with her but she was too strong.  Another right turn brought me to the old Mactan Bridge (I was told) and at the end of the bridge, someone gave me a band which I hang it over my neck.  I made a right turn but kept to the left side of the road.  It was about 1km plus before I reached the junction where I turned right onto the new bridge earlier. 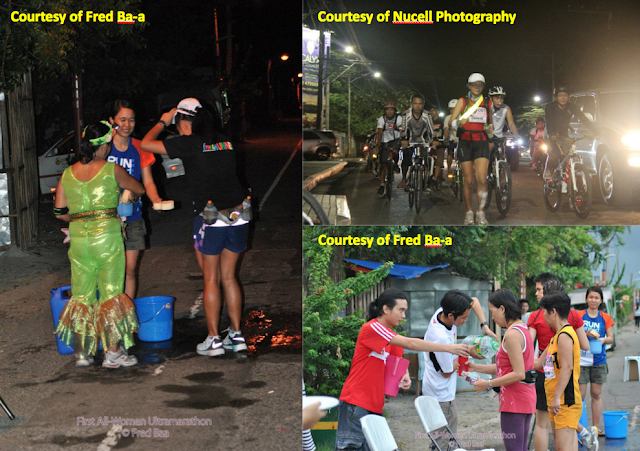 This time, I was told to run straight ahead.  Then, I saw other runners running towards me.  This was the short out and back loop where we could see the front runners.  As we past each other, we greeted each other with "good morning" - it was 2am plus.  It was definitely more fun seeing other runners.  I crossed a small bridge before coming to the u-turn point aid stations where I was given another band.  Someone asked about Chantel and I told them she should be somewhere behind.  I then start pursuing the runner which just left the aid station.  I didn't manage to catch up with her until at about the 37.5km mark aid station.  There was another runner with her .  I took a quick drink and passed them, knowing I had about 12.5km to go.  Approaching the junction, I made a left turn which would lead me to the same new bridge but on the left side.  Somehow, I got back my running rhythm and I was able to pushed harder than I could earlier.  I took the road instead of the stairs coming down from the bridge and a policeman guided me forward.  As the aid stations were now 2.5km apart (since the 20km marker), psychologically it took a shorter time to reach the next "check-point".  I caught up with another runner just before the 42.5km mark.  I talked to her for short while before I picked up my pace again.  Just before the 45km mark, instead of offering me the usual stuff, one the volunteers holding a mirror asked me if I would like freshen up myself!  I declined politely and took off. 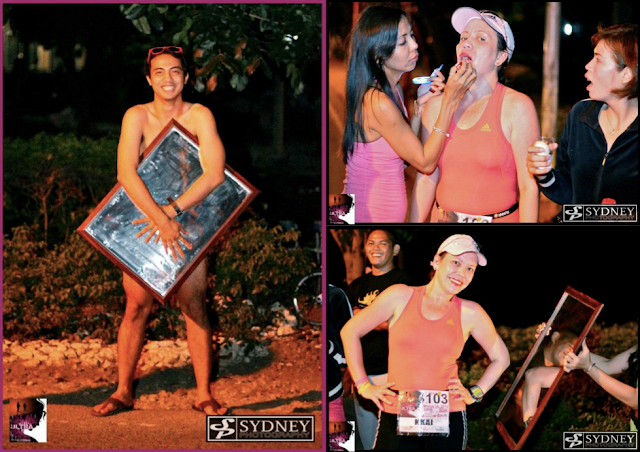 Then I reached the 47.5km aid station and was thrilled that the end was near.  A volunteer gave me a rose.  I thanked him and pushed hard before I caught 2 more runners.  All these while, my fingers being pricked by the thorns on the stick of rose.  :(  Someone signalled me to go to the other side of the road soon after, before entering the compound of a resort.  Finally!  The finishing line, which I crossed in a time of 6hrs 45mins!  The announcer made the announcement before someone shook my hand, hung the finisher medal around my neck, and led me to the photo area.  I was then given my finisher pack, which included my finisher tee and certificate.  While waiting for Chantel, I already start to replenish myself with food, fruits and drink.  Daylight came, shower came and more runners came through the finishing line.  I finally saw Chantel at around 7am plus.  Glad that she pulled this off despite her condition.  At around 8am, after the 10-hours cut-off, the race organisers gathered all the ladies to don our finishing tees to pose for a mass photoshoot at the beach front. 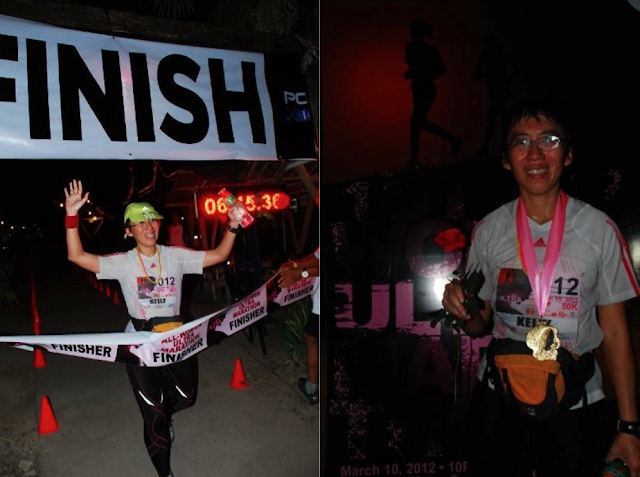 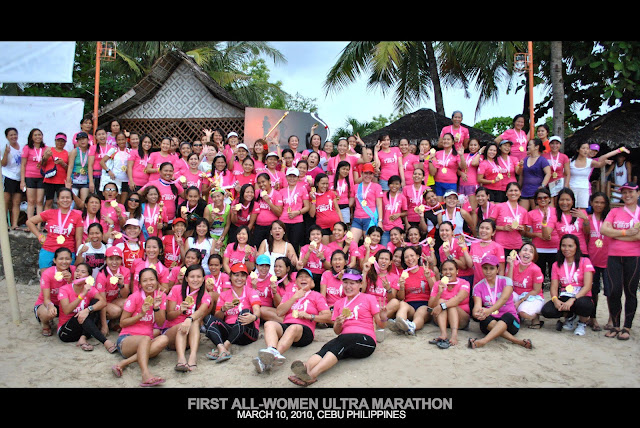 It was a very well organised race, extremely value for money.  The volunteers and marshallers were very encouraging and supportive at all times.  Even after the we had reached the cut-off time limit, I was glad that the race organisers allowed the remaining ladies still out on the course to complete what they set out to do.  In all, every women participants, 175 ladies in total, completed the 1st AWUM in Cebu!  These were the messages about women empowerment and about the men (and women) giving their fullest support.  I was indeed very privilege and proud to be part of this inaugural run.  :)  THANK YOU!
Posted by Ripley Runs at 12:45 PM

Hope to see you again in Cebu

Great post Kelly, it was a pleasure meeting you here in Cebu! :)

thank you... i'm not that much of a writer... without the photographers on duty that day, it would be a boring blog... :)

now this makes me want to join the 2nd AWUM! :)

Go for it, csevilla... :) And if you are running for fun, bring along a camera!