Woke up at 6am plus to bath and change. Then, went down to have breakfast with Eliza after she had bathed and changed too. I had ham and egg plus some orange juice while I can't remember what Eliza ate :p. After breakfast, we took the opportunity to "test" how cold was the weather by going near to the entrance of the hotel. Boy, it was a very cool morning but I felt its not as cold as in Milan last Dec. We decided to take "refuge" by going back to our room. Besides, it was still very early. We met Tooty1511 on our way up and apparently, she had one hell of a trip on the way to her hotel. What happened was she had to look for another hotel as her reservation was released when she did not turn up on Friday night. It was then she clarified that she had made reservation on the wrong date and when she failed to turn up, the hotel had the right to assign the room to other guests. No wonder she brought along her entire luggage to our hotel to meet us. Luckily for her, she managed to get a room in the same hotel for 2 nights. 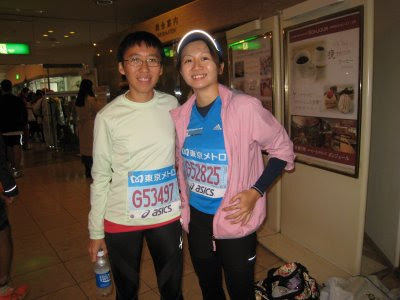 At around 8am (or thereabout), we met Brownboy and proceed to the hotel's ground floor. I decided not to make use of the baggage service while Eliza and Tooty1511 both brought along some change of clothing. Both of them also put on the poncho given with the race pack to keep warm and they were rather amused that I needed no poncho, gloves or additional warm clothing. I was quite certain by then that although the weather was cool, it was not as bad as in Milan and if I wore the same attire (long, dri-fit tee over short, dri-fit tee), it should keep me warm enough. Then Brownboy decided that he had to get his arm warmer (or was it his cap - I couldn't really remember). We waited for him. While waiting, we saw many runners carrying their baggage walking towards the start line. Told Eliza and Tooty1511 that perhaps they should make a move first since Brownboy and I did not have any baggage to deposit. Before we parted, I wished them good luck and would see them back at the hotel if I managed to complete below 5 hours. 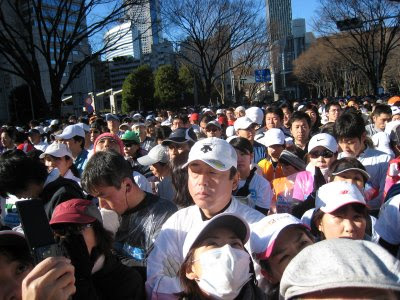 I waited for Brownboy and we left for the start at about 8:30am. We had to make a huge detour even though the start line for our respective pents were just right in front of the hotel. We had no choice but to abide by the rule. While trying to get into the queue, Brownboy and I got separated as we were pushed forward by the force of the crowd from behind. It was scary as that was the first time I encountered such pushing and shoving around. In fact, it was so bad that I almost tripped. At 9am, an announcement was made in Japanese - for the wheeled-chair participants to start, while the main marathon event was flagged off at 9:10am. I only managed to cross the start line at approximately 9:20am.

I was cruising along the course, enjoying the atmosphere, not expecting to better my PB of 4:44:57. The crowds were different from those I encountered in America and in Italy, probably because they spoke of a different language that I could not understand. :p I stopped to take photos of the time marker which was stationed at every 5km mark, although I did not check exactly how long I had took to reach that point. After I passed the 10km marker, I saw the elite men running passed me on the other side of the road. I was excited and slowed down every now and then to see if I could catch a glimpse of Jason, a wonderfully talented American who had his fair share of injury. But I didn't. The weather by then was getting a little hot with the sun shinning full blast at the runners. Luckily, the wind was just as strong and I was enjoying myself thoroughly, until I spotted Fennel just past the 33km mark. I shouted to her to get her attention and asked how's she was doing. She acknowledged that she was fine but I thought if she was then she should be much faster than me. Nevertheless, she surged forward and I did not managed to see her again (although I learnt later that her ITB acted up again and I finished the marathon faster than her.) When I reached the 40km mark, I realised that I could achieved another sub-5 hour marathon and I was quite ecstatic. I picked up my pace and although there were a few upslopes towards the end, I managed to come in 4:40:01, which I was absolutely very proud. 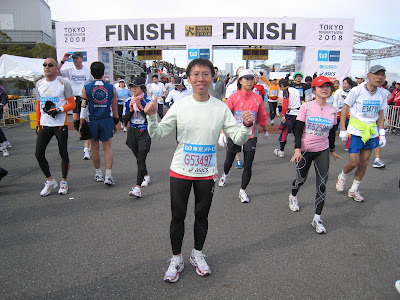 Perhaps in future, I should be more confident of my own ability that I could achieve a sub-5. Or perhaps I should choose a marathon held in a cool climate with at least a 2-3 degree celsius temperature and a low humidity. Though I hope my best is yet to come, I won't be too disheartened if I could never match or achieve another PB again, since I'm not getting younger. The most important thing is still to enjoy my run and saviour the experience running in another new place, new country. :) P.S. Sadly, Jason got a DNF for his marathon due to injury. Sometimes, I think he just pushed himself beyond what his body is capable of, although I have a feeling that he thinks I never train and race hard enough. :p As for Eliza, she also ran a sub-5 marathon! Good for her!!! :) 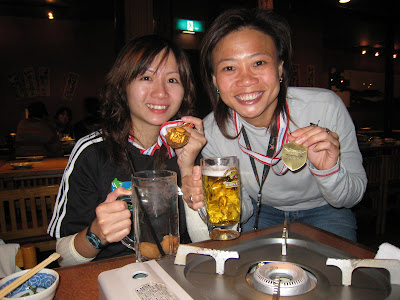