It was a cold cold morning in Milan on race day. I could feel the difference the moment we reached Milan from Pisa 2 days earlier. In fact, when we first arrived in Milan, it was rather cold that I had to suggest to Fennel if we could take refuge in the MacDonald where we would be able to keep away from the wind and also sipped hot coffee. I regretted that I was so forgetful to bring my jacket, knowing that it was winter time in Europe although the website assured runners that it would not snow. So I decided to wear my long-sleeved, technical tee over my short-sleeved, technical tee for the marathon. Previously, I needed only to wear a singlet inside to keep warm. That probably showed how cold it was in Milan. After getting ready, Fennel and I went for breakfast at the hotel's breakfast bar. I ate 4 slices of ham, 2 hard-boiled eggs, 2 cups of orange juice, 2 slices of bread and 1 power gel. 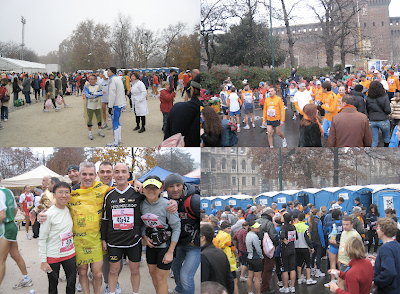 After breakfast, Fennel and I took a slow walk to the start. We met many runners along the way. Most wore gloves, head and ear warmers to keep warm. When we reached the baggage service, we were unable to find the one to be used by the ladies. After spending 5mins walking in all sorts of directions, we managed to locate the tent! This was also my first time using the baggage service as I felt that the weather was too cold and I needed something to keep myself warm after the marathon. After dropping our baggage, we ran into 2 Italian men, one of them asking if we remembered them. Actually, I couldn't as they looked alike to me. :p So one of them pointed to his Firenze Marathon poncho and explained that we stayed in the same hotel in Florence and that they did the Firenze Marathon last weekend. Only then did Fennel and me remembered. We wished each other good luck in the marathon and went separate ways. As Fennel needed to use the mobile toilet, I waited at the start taking photos of runners. There seemed to be more runners in Milan than in Florence. There were also DJ's making announcement to welcome everyone (I presumed since I couldn't understand Italian). The queue for the mobile toilet was very long and we bearly had 3 minutes to rush to our pent before the gun for the start was fired. 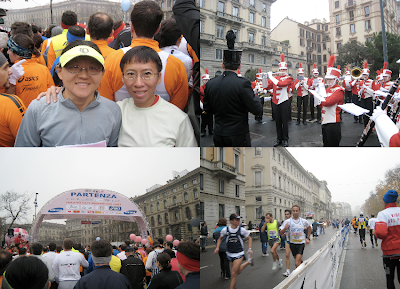 Once I started running, I didn't feel as cold. And after 3km, I could feel the warmth. I never felt that before so I guessed it must have been the Adidas short-sleeved garment that I bought just before I left Singapore. There were performances along the route and after the 5km mark, I saw the top male runners running in the opposite direction (should be after the 9km point). I stopped to take some pictures before running. Soon, I encountered the top female runner. In fact, there was only 1 female runner running with some guys, while the 2nd female runner was some 20m further behind the leader. Then, we ran passed the Piazza Duomo. A kind Italian runner offered to help me take a picture with the church. Also near the church, there was a water point where I took some much needed water and oranges. When I passed the church, I stopped to take more photos. Glad in a way because the Milano City Marathon wasn't as scenic as Firenze Marathon and the church was just about one of the 3-4 monuments worth your effort to stop and admire. 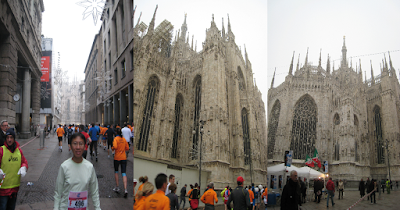 The truth was that the Milano City Marathon, being run in the fashion city of Milan, was always going to be less scenic as compared to running in Rome or in Florence. The traffic for the running route were also not fully closed although full credit must be given to the traffic police and volunteers, for performing such a great job that runners were always given full support and priority when comes to crossing at traffic junctions. From my personal observation, I also noted that although some of the drivers were frustrated for being caught in the traffic, they never once horn the runners, although a small handful of minority did vent their anger at the traffic police and volunteers. After around the 25km mark, I noticed a grand stadium on my right. I reckoned it must be the San Siro Stadium, the home ground of AC Milan and Inter Milan. [And I was right after after visiting the stadium the next day.] At the 30km marker, before I crossed the timing mat, I noticed the clocked showing 3:23:03. Wow. I was fast! I mean, I usually took 4 hours or longer, to reach the 30km mark but in Milan, I felt so good that I was able to cover 30km in a shorter time. I didn't dare to calculate if I could get a PB as I didn't like additional stress put on myself. So I continued running. 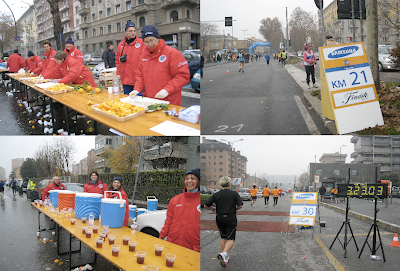 There wasn't any clock when I crossed the timing mat at the 35km mark. But checking my watch, I realised that it was a possibility to achieve a sub-5 hour marathon! I kept my cool and excitment and pressed on till I reached the 40km mark where I could safely say that it would be a definite sub-5 marathon for me. The last 2.195km seemed like a long time to come but I eventually completed my 22nd marathon in my best ever real time of 4 hours 47 minutes 28.55 seconds. I was ecstatic and overjoyed. My final net time was 4 hours 44 minutes 56.60 seconds. This was probably a one-off result but who cares even if I was unable to produce such a good performance ever again. At least for now, I got to tell my friends that my PB for marathon was 4 hours plus. "Welcome to the sub-5 club" - some would say. :p Heeheehee... 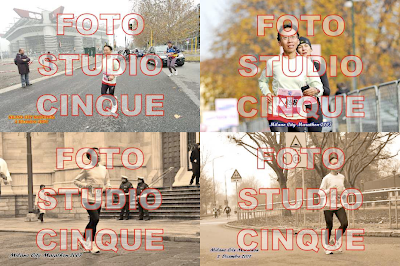