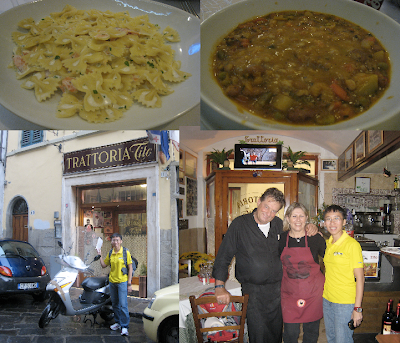 Went to the City of Florence with Fennel to try for my 2nd marathon in Italy in Nov last year. We flew into Milan and took their railway to Florence, arriving on Sat early afternoon. It was a tiring journey and I was especially worried for Fennel since this was her first ever long-distance trip from Singapore. But luckily, she's so enthusiastic about everything especially when it comes to taking photos that I need not worry about her at all. After arriving at the Florence railway station, we decided to find our way to the hotel instead of hailing a cab. :p This saved us some EURO $$$ although it was quite an experience to pull the luggage through the crowded, cobblestone streets, in the light rain.

After checking in at Benvenuti, we washed up and walked to a nearby restaurant "Trattoria Tito" for a deserved but rather late lunch. It was extremely good. The soup and pasta. I had never tasted such good soup before. Although it was expensive, it was unlike those that you found in Singapore. There were just so much ingredient in the soup that it could present itself as a meal. But of course, it would not be sufficient for me since I need rice for my meal. 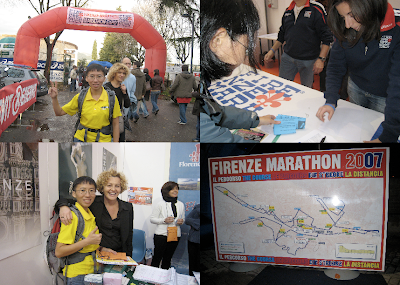 After meal, we took a bus to the marathon expo. The expo was unlike the SCSM marathon expo in Singapore. The queue for the collection of the package was rather messy. There were no clear lines that runners could follow. Everyone just went to queue up at whichever was the shortest line. Soon more and more runners would crowd around you and if you were slow to signal to the volunteers behind the desk that you are next, the chance would be gone and you would have to wait for the volunteers to finish serving that runner. We waited for a short while before Fennel got her marathon package. I was not so lucky as I did not print out the form. So I had to re-queue at the "Trouble Desk" counter to get my confirmation slip printed out. After collection, we were told to collect our event tee and event leotard at the end of the expo. This was basically to "enforce" runners to go though all the stores and booths at the expo - a very clever tactic which our local race expo could probably adopt the same approach. We picked up loads of Italian race pamphlets, project samplers and some magazines. At the end of the expo, we collected a long-sleeved, red-color event tee and a blue-color event leotard. Unfortunately, the event tee was just like any other tee with no official sponsor logo on it but the event name. The event leotard was sponsored by Asics so it had an Asics logo and the event logo. How cool to have an event leotard! 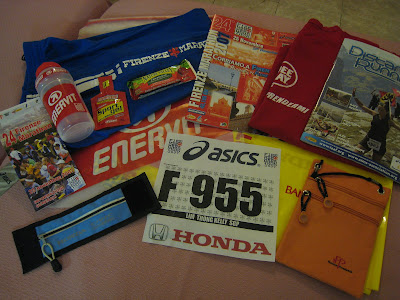