This was my 3rd attempt in running a back to back marathon over 2 weekends. The difference was that the previous 2 attempts were done in the same country, USA. This time round, i did both marathons over 2 weekends in 2 different continents due to my work commitment as I was not able to apply for a straight 2 weeks leave.

Making a decision to run a marathon was never easy for me. It was taxing physically and especially taxing mentally. This time round, my preparation was punctuated more because of work rather than injury. At least I knew I could achieve my aim as long as I complete them and not to be too overly concern with my finishing timing.

However, what I did not expect was the "wound" I inflicted upon myself. You see. I had this corn on the bottom of my right foot near to the ball of my foot. It was annoying than painful so I put on a corn plaster for the Gold Coast Marathon. On Tuesday morning when I reached the office direct from the airport, I removed the plaster and some loose skin. In the process, I over-removed some part of the skin which resulted in it becoming reddish and tender. It did not felt so painful and I was still able to go for lunch with Brokie on Wednesday afternoon. But came Thursday, it became unbearable. I applied the Podofilm issued by my medical doctor throughout my flight. My condition did not improve. So here I was in Bellevue (city next to Seattle), on a beautiful Thursday morning, wondering very hard if I should go sight-seeing or to rest in the hotel. I had to make a decision: to enjoy my holiday or to recover for the marathon on Sunday.

I decided to rest as I did not bring enough cash along and at the same time, there were Wimbledon as well as World Cup 2006 matches. I stopped by the drugstore and bought some plasters and medications. Then I went back to Hyatt. The day passed by fast as there were just too many prorams to watch! By night time, I was getting anxious as there was no improvements. I started sms-ing my trusted friend and another colleague. I also sms to Bee. They gave me almost the same advise: keep your feet dry, do not use water base medication, use plaster. I also posted under the medical thread of SGRunners and soon advises and replies came. In particular, Roentgen asked if I could email him a picture of how it looked like, he would be able to provide a more accurate diagnosis. Immediately, I took my camera phone, snapped a pic, and sent him a MMS. It was not so clear due to the lighting. But this showed the importance of technology. Had I brought along my digital cable for my EOS20D, I would be able to email him a high resolution picture of my corn condition!

I spent Friday and Saturday visiting the Expo and walking around the vicinity. (Hyatt was centrally located and there are a few big shopping malls). I also went back to the drugstore to buy additional plasters and other medication. In short, I was really desperate. By Saturday evening, I knew I was not able to recover enough to run pain-free the next day. So I worked out a plan while having my pasta dinner - to try to complete 10 miles in the first 2 hours; then 9 miles in the next 2 hours; which leave me with 7.2 miles to complete in the last 2 hours and make sure I am done within the 6-hours time limit. I felt good and after watching the reply of Germany vs Portugal, I went to sleep.

Morning came fast. I changed to my running gear, change a new plaster and off I went. I also brought along 2 plasters in case I need to change along the way and in the process left my PowerGel in the room. The weather was nice - a cool 16 degree celcius or there about. Perfect. I tried not to think about my corn though I could felt the slight pain whenever I stepped on my right foot. As soon as the horn for the marathon was blasted, the pain became intense right from the 1st step. Damn it, I cursed myself, must be due to the hard pounding when I ran. I also felt the muscle on my right shin being tense up. The 1st mile was painful though bearable. I prepared myself mentally for what may come up. Some how, I felt that I was in deep trouble. At the start of the 2nd mile, I walked for 10 steps before I started running. And wow! I felt even worse! I knew I just had to continue running. I managed to cover the first 5 miles in 1 hour. It was according to my plan. I just had to continue this momentum and pace and I should cover 10 miles as planned. So I continue to run. It was more difficult but I managed to achieve what I had planned - 10 miles for the first 2 hours.

By the start of the 3rd hour, I knew I was not able to run at that pace. So I slowed down. After 10 minutes of walking, I knew I would be faster if I walked. So I started to fast march and re-calculate how far I need to cover to complete in 6 hours. Basically, I had to cover 4 miles for every hour. Seemed very easy. But in between, there were upslopes and downslopes. And the downslopes were especially tough as when the gravity would pull my body weight down, I had to balance using my feet! Boy, I really cursed and sweared. Luckily no one was near to hear what I had blasted. I drew from my cadet experience in ROC when we covered more than 70km in 9 hours, in full battle order. I kept telling myself that this was merely running and I was not carrying any load. So, I was able to cover 4 miles for every hour consistently. Big cheers and words of encouragement greeted the runners from the volunteers and policemen and women, something that you would not find in Singapore. And I reached 22 miles in just a few mins over 5-hours.

Out of a sudden, the official car covering the rear came from behind and told me that she had to pick me up to the end point if I was not able to keep up my current pace. In short, I could barely make it back by the 6-hour mark. That truely woke me up. I knew if I were to continue walking, I would not make it back in time. I also felt cheated as the organiser assured me through email that the timing would still be opened although runners were expected to follow the traffic rules when traffic opens by the 6-hour mark. I told myself that I did not fly all the way to Seattle and not sight-see or get an official timing for my marathon. Since I already made sacrifice on the sight-seeing part, I had to finish within the 6-hr limit, got an official timing and most of all my finisher medal. Immediately I gather enough strength and broke into a slow jog. Soon, I reached the 23-mile marker at 5hrs 14mins. After I took some drink at the drink station, I broke into a slow jog again and by-passing 2-3 runners who were walking. I really felt good and soon I saw the 24-mile marker. My watched showed 5hrs 27mins. I continued jogging but my body conqured my mind when another slope! So I decided to walk to the top of the slope. Soon after I turned at the top of the slope, I noticed the 25-mile marker. That really perked me up a bit as I knew the end was near. My watched showed 5hr 47mins. However, the end did not seem near as I was still jogging along the main road. I looked at my watch again: 5hr 51mins. I was a little demoralised but somehow, I gathered enough strength to keep going. Very soon, I spotted the runners in front making a left turn about 400m ahead. This time, I knew I was really close. I took almost 6 minutes to cover that 400m and when I reached the top before turning, I spotted the 26-mile marker!!! Gosh, another 0.2 miles and I'll be home!!! I quickly picked up my pace a little and ran passed this older man (probably in his 50s). I stopped to catch my breadth and the older man whom I overtook earlier, told me to keep running as we were less than 0.2 miles from the finishing line.

I eventually crossed the finishing line. And I was overwhelmed. Felt like crying because of the blister. But most importantly, I earned my finishing medal. with a time of 5hrs 59mins 16secs. Phew, that was truely close. I did it. And as expected, I end up with 3 blisters: one on each side of my big toes and a super huge one (about 2 thumb sizes or 1/3 size of my medal) just below my corn and torn skin. It looked awful. But I certainly deserved a good meal and a good rest.

I did not know what on earth was I thinking when I walked to the start line. But I was glad the devil of me was probably still sleeping. If you ask me now if I would do it again with the same condition, I probably would never ever put myself through that kind of pain. Then again, the magical draw of getting the finishing medal was always too strong a temptation for me to decline such an insane challenge. :) 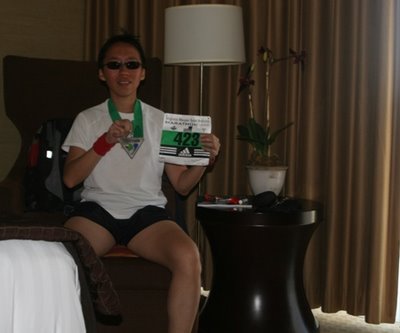 I visited the famous Pikes Place in Seattle but otherwise, an uneventful and less interesting trip this time round. Nevertheless, I should be pleased with myself for finishing another marathon under trying circumstances. 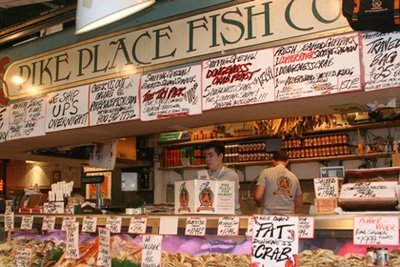