This is my 5th marathon for 2005. It was the 2nd time that I decided to attempt 2 marathons over 2 weekends. (The first being in May when I completed the Clevland and Mad-City marathons just 1 week apart). I left Singapore for Richmond in Virginia on 10 Nov 05. And reached New York City on the 10 Nov 05 evening. Again, I took the popular Greyhound bus transportation from NYC to Virginia, arriving at the Richmond's Greyhound bus station at approximately 6.30am on 11 Nov 05. I rest in the bus station for about 30mins before I hailed a cab to the hotel. Unfortunately, I was way too early to be checked in and I decided to deposit my lauguage with the hotel so that I could do my sight-seeing straight away.

I got a rude shock upon stepping out of the hotel... The weather was cool (which was good). However, it was also very windy and I began to worry about the marathon the next day. The State Capitol building which was situated across the hotel was under construction so I was unable to visit the place. So I walked towards the garden next to the State Capitol building, which has a statue of the poet, Edgar Allan Poe and also that of George Washington. (Richmond, Virginia is the headquarters of the "rebels" during the American Civil War - I was told). Then I reached the outskirt of the Richmond University. As, there was not much to visit around around the campus and downtown Richmond, I decided to vist the Marathon Expo to pick up my BIB and goodie bag as I was tired. 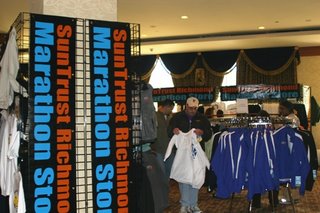 The Marathon Expo was well staffed, very organised and had quite a few exhibitors selling different products and souvenirs booths. I got myself an official blue-color Brooks windbreaker as well as a pair of CW-X® Conditioning Wear ® - Pro Tights at US$97 - a very cool buy in my opinion! This was the nicest and most technically designed running tights and I was very excited. After visiting almost every exhibitors, I decided to check out the pasta dinning area though it was still early for dinner. Along the way, I noticed that the organiser was conducting free sessions of course inspection! I was pleasantly surprised and decided to sign up for the 1.00pm session. 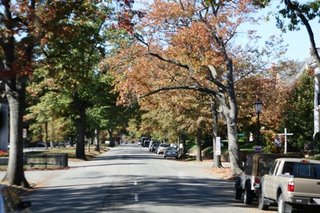 I boarded the bus for the course inspection at around 12.55pm, at the front of the host hotel. There was a narrator on the bus, a member of the organiser, soon the bus was loaded full with runners taking part in the various categories. The narrator gave a very detailed account from the starting, how long to run, before turning at which critical junctions; what is the elevation along the way; as well as the history of Richmond, to the end of the marathon course. I felt as though I have joined a tour with a very knowledgeable tour guide! In fact, it was such a detailed account that instead of taking 1-hour for the inspection, we took almost 2 hours! I also met a 78-year old lady (below) on the bus and chit-chat with her along the way. She'll be taking part in the marathon event and her target was to complete it in 6 hours - the same finishing time I had given myself to complete! After the course inspection, I went back to the hotel and checked-in. I was dead tired by then so I took a nap. 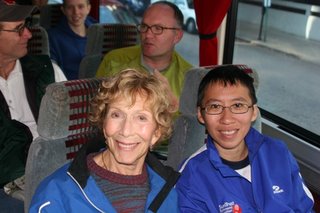 At about 7pm, I went back to the host hotel for the traditional pasta dinner. I was disappointed as the dinning hall was very small (they had around 10 tables at the maximum). Also, the variety of food they served were also limited. There was no entertainment during the dinner and generally the atmosphere was kind of dull and uninteresting. After dinner, I went straight back to the hotel, and did some stretching before I slept. It was early but I had to rest as I did not sleep on a proper bed for the previous 2 nights. I woke up around 5am feeling refreshed. Then I had my breakfast consisting of bread and sports drink. I went back to lie down till about 7am before I changed to my running gear. I wore 2 layers of running shirt (1 sleeveless and 1 short-sleeved) and the CW-X tights which I bought at the expo. But I chickened-out at the last minute as I knew I was not suppose to try anything new on the actual run. Besides, the weather seemed bearable - not so windy as the previous day so I changed back into my normal running shorts instead.

I started the run confidently, knowing almost exactly what to expect at the different junctions and stretch of roads. As usual, I told myself to maintain a 5miles/hour pace and taking walk breaks in between the miles starting at after the 1/2 marathon marker. The support along the course was fantastic. There were always supporters lining along the major roads and when we ran inside the more private roads, the residents would wave and clap for us, encouraging our effort and pushing us forward. It was a nice cool day and I guessed the weather hovered around 16 Deg Cel. I managed to maintain my pace but I decided to slow down a little as I did not want to exert myself too hard. This was because I felt that I had to preserve some energy for next week's marathon. Along the way, I noticed there are official photographers stationed and I realised that I had my photos taken just not long ago. I decided to look out for them so that I can be smiling at them...

By the time I reached the 22-mile marker, I slowed down quite considerably. My walk-breaks were also slightly longer but I kept it within 2 minutes at most, although instead of taking walk-breaks at every 5-mile, I took them every 1/2 mile! The last 2 miles of the marathon was some "winding" roads due to the various turnings that we had to make to manoveur back to downtown Richmond. By then, I spotted many runners completed their events, each wearing a nice finishing medal and a broad smile on their faces. Some of them clapped for us, back-of-the-pack runners, cheering and firing us up that we were really nearing the end! The last 1/2 mile was steep downslope and instead of picking up speed, I held back my momentum due to the steepness of the slope. My knee caps was hurting a little and if I were to dash to the finishing, I knew I would suffer. Soon, I reached a more gradual part of the finishing and I managed to sprint across the finishing line and complete my 10th marathon in a time of 5hrs 51mins 04 secs. SunTrust Richmond Marathon indeed lived up to its reputation of being America's Most Friendly Marathon (Jan's Runners' World, US edition) and I looked forward to Philadelphia Marathon with confidence. I was also satisfied with my timing. Although I acknowledged the fact that I will always be a back-of-the-pack marathoner, I would not be bothered if I achieved a PB or not, as long as complete my marathon.

I went back to the hotel, washed up, ate and sleep for the rest of the day! On Sunday, I visited the Richmond Civil War Visitor Centre, the War Memorial of Richmond, as well as the Library of Richmond. By the end of the afternoon, I had given my legs enough walkings and the muscles in my legs were not as tight as before. Spending 3 days in downtown Richmond was about right and I looked forward to my next destination: Wahsington D.C. I borderded the Greyhound on Sunday night and reached the capital of USA before midnight.