I signed up for the Eco Trail de Paris back in 2014 but after I sprained my ankle at the Lantau 100km just 2 weeks before the race, I was able to postpone the race to 2016 due to the insurance package that I took out during the signing up.  Unfortunately, as I was the only staff left in the office, I wasn't able to apply for a longer leave to truly enjoy Paris.  Nevertheless, I was still very excited to meet up with Christelle whom I first met on a trail running trip to Orang Asli organised by Trail Running Singapore when she was working in Singapore few years back.  :)

Day 1 - Arrival in Paris
I arrived in Paris two days before race day on Thursday, at around 08:00am!  Christelle was on her way to the airport to pick me up.  It was about two years since I last saw her although we kept in touch occasionally via Facebook.  The weather was a little chilly in mid March in Paris.  Traffic from the airport was very smooth as well.  We did some grocery shopping before dropping by her apartment where she cooked some delicious pasta for lunch.  After lunch, Christelle accompanied me to the hotel to check in my luggage before we headed straight out to the race pack collection expo by train.  It was a huge expo but unlike our Singapore Expo where the Halls were numbered and positioned in sequential order (e.g. Halls 1 to 6, etc), it wasn't the same in Paris.  We walked a fair bit before finding out the exact location of the hall.  Security was tight as every visitors were subjected to bag checks.  I picked up my race pack before checking out the rest of the exhibitors.  It was not like those expo I had seen in Singapore, South Africa or USA.  But there were more things to sight see in Paris so we left after a quick visit!  Christelle brought me to the major sight seeing spots before we had dinner and wishing each other the best of luck!  (Christelle for the lazik and me for the race). 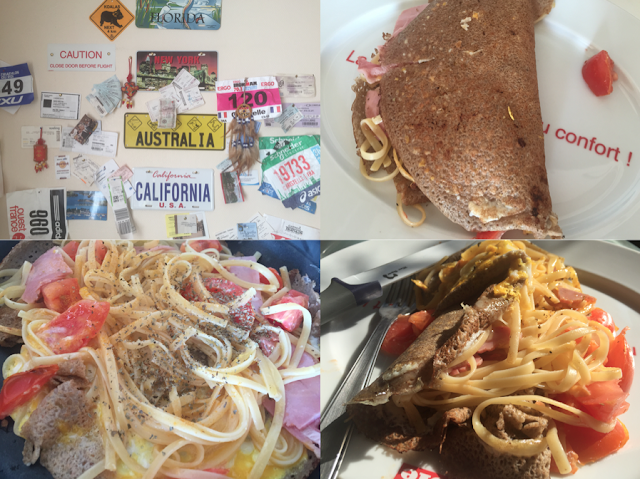 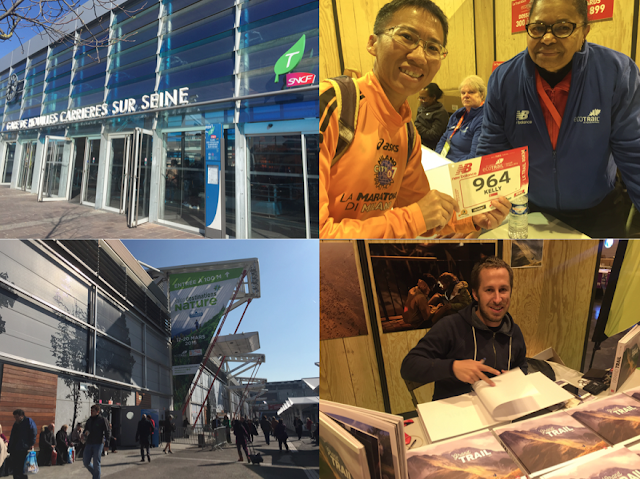 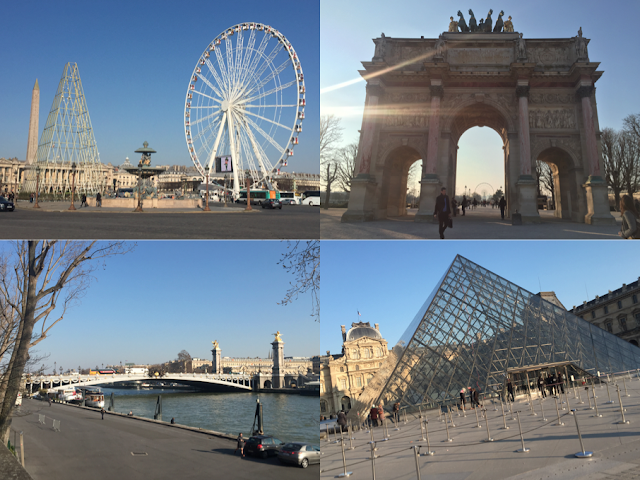 The Many Beautiful Sights of Paris!

Day 2 - Free And Easy
I slept till late morning, had breakfast, before heading out to check out the race pick-up point at the Saint Quentin-en-Yvelines Train Station.  I took a train to the station so that I won't need to waste unnecessary time on race day.  Unfortunately, finding the line in the train station was very confusing and I got lost inside the maze due to the different type of train systems available to the commuters!  Luckily, I was using a multi-day pass and was able to enter / exit the gate without requiring to pay.  Eventually, I was locked out from entering the gate (probably due to multiple entry in the same entrance) and a service agent advised me to walk on the road surface so that I could identify the building where I was supposed to go.  Once I locate the train, the ride to Saint Quentin-en-Yvelines Train Station was smooth as it was a direct train.  The next thing to check out was the race ending point, which was at the Eiffel Tower.  With the race starting at 12:15pm and me likely to take up all the time available for the race, meaning I would finish around 01:00am on Sunday, it would make sense to find out the route back to the hotel.  Once I recced the route, I went back to get ready my race stuff. 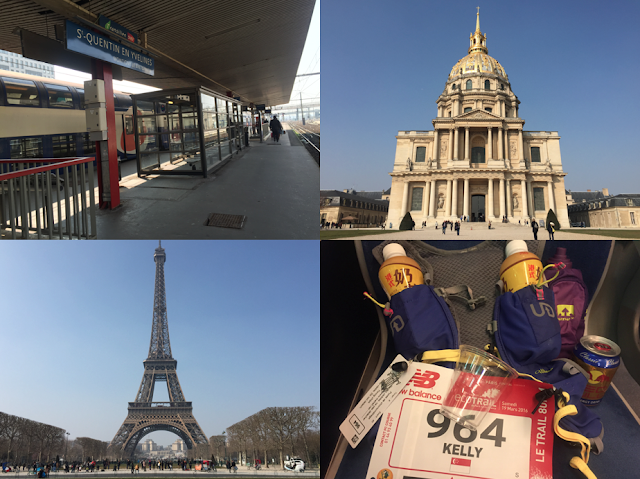 Checking Out The Race Pick-up, Race Finishing Line and Getting Ready!

Day 3 - Eco Trail de Paris 80km
Since the race starting time was 12:15pm, I need not wake up at unearthly hour.  In fact, I had breakfast at the usual time and an early lunch before heading to the start.  Upon reaching the Saint Quentin-en-Yvelines Train Station, I followed the runners to board the bus to the start line.  It was getting windy and I decided to hide in a tent.  Just before the flagged off, it started to drizzle.  :(  One thing I learnt from running in wet weather, was to keep myself as dry as possible even if I didn't feel cold from the wind or rain.  I put on my rain jacket and gloves before commencement of the race.  After running for about 10 minutes, I warmed up and had to remove my rain jacket.  The trails in Paris was relatively flat.  Well, at least from start to Check Point 1 at Buc which was 22km away.  (There were a total of 6 check points including the one at Eiffel Tower).  Course markings were sufficient and at road intersections there were marshals to guide the runners.  We ran through woods, forests and parks.  It was nothing like our MacRitchie Reservoir.  The trail was smooth and I need not pay special attention to where I should land my foot.  In fact, this was one of the few races where I was able to enjoy the nice scenery.  I arrived at Buc after 2hrs 59mins of running with 45mins of buffer time. 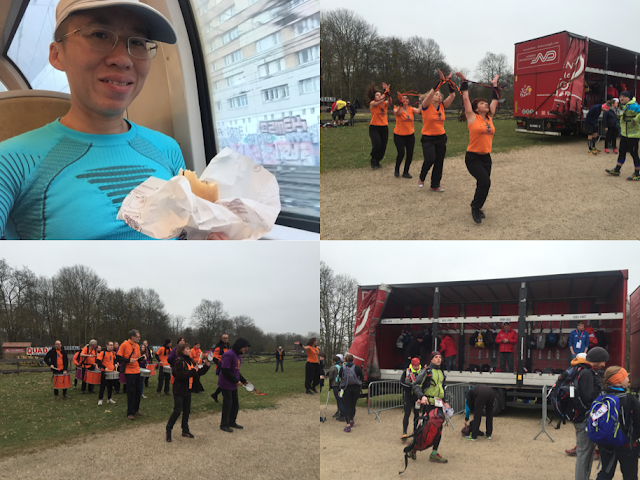 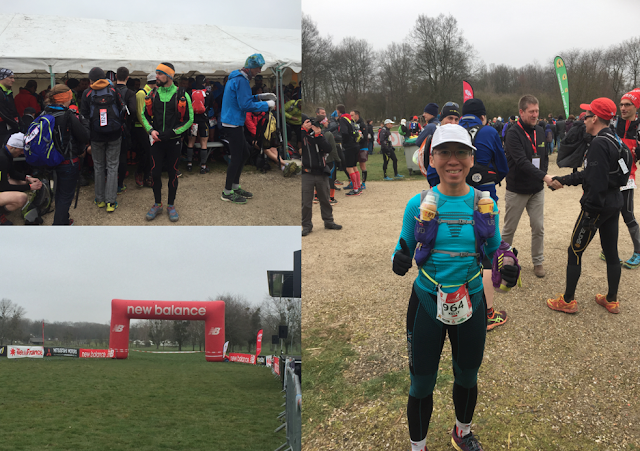 Getting Ready At The Starting Line!

I stopped to take my gel before heading out.  Check Point 2 at Meudon was 23km away with no cut-off time.  This section of the trail had more upslopes and downslopes and I took the opportunity to walk the upsloes to save energy.  Unfortunately, I wasted a bit of time trying to confirm if I was on the right track as I wasn't paying attention to the course markings on one occasion.  On another occasion, I completely missed the course markings. Luckily, a runner shouted out to me from a distance.  How he guessed I was doing the same race I didn't know but I was very  grateful.  Otherwise, I might be lost completely.  With the sun setting, I slowed down even more.  I told myself to keep moving or I would feel cold, miserable, and risked missing the cut-off for the remaining check points.  Near to Check Point 2, the route became confusing as runners were required to run through a park and some steps.  I located Check Point 2 soon after but unfortunately it was dark and I didn't feel I was dressed appropriately to tackle the remaining trails.  Besides, there was a Meudon Train Station nearby.  If I continued, I might not meet the cut-off and it would be difficult to get back to the hotel.  Once I was satisfied with my excuse, I pulled myself out of the race after 7hrs 27mins of running.  :( 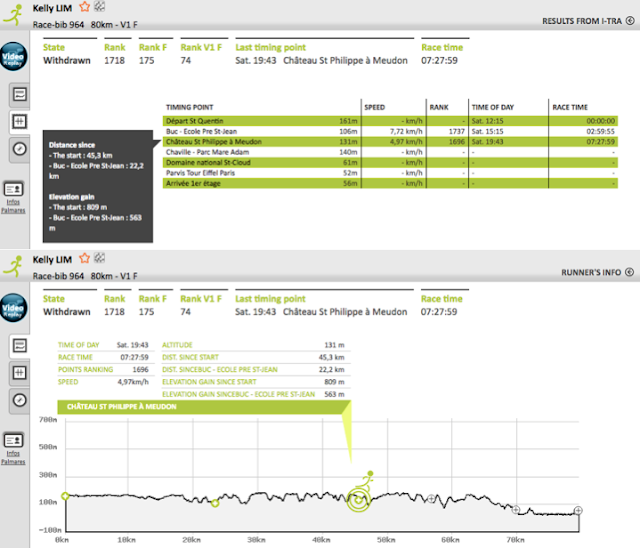 Day 4 - Bon Voyage
I was not surprised that I DNF as I was already worried about tiring myself out and not being able to wake up on time to catch the flight at 12:00pm back.  Given that the total elevation change was a modest 1,500m over 78km and that it wasn't a technical trail, I still had hope that I could finish the race within the 12hrs 45mins cut-off.  I would be back to tackle this race again but shall give myself ample time to reach before and after the race, so that I could concentrate on running the race and need not worry about missing my flight home.  Paris, a place to sight see, relax, enjoy and of course to experience trail running.
Posted by Ripley Runs at 11:33 PM

At Aggrate Shaufer Travel & Tours & AS Car Rental, we provide chauffeur and limousine service for your guest and business partners for their visit in Malaysia. Beginning with us, we will ensure that your experience in Malaysia will be an enjoyable event.