Rosemary and I signed up for the Xinshe Sakura Marathon 2015 last year through our usual contact, Sam.  :)  It was a no-brainer to join the race as I had wanted to do another marathon during the sakura season since I completed the Nagano Marathon in April 2003 (unofficially).  We booked our flight and left everything else (from traveling from Taipei Airport to accommodation to traveling to/from race, etc) to Sam.  This meant that everything would be stress-free.  Well, almost.  Except the part about completing the race early so that I could catch the last ferry service provided by the race organisers from the race start/end point to the High Speed Rail Station, to catch my flight in Taipei. 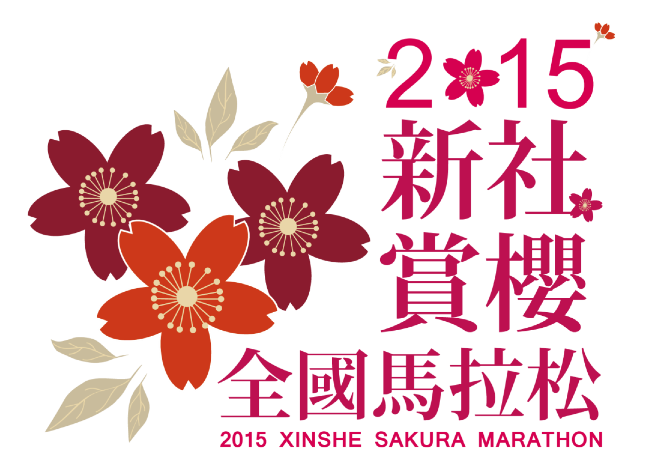 Pre-Race Activities
So on 7 Feb, Rosemary and I took the midnight flight from Singapore and arrived at Taipei around 6:00am with 3 other runners (Cindy, Siew Ying and Teck Huan).  After we cleared custom, we met Nancy who flew with Scoot, at the Arrival Hall.  A van pick us up outside the Arrival Hall and drove us to the race start which was at the city of Tai Chung.  (Sam was running 2 marathons over Saturday and Sunday, so Nancy was the de facto "tour guide" for our trip to Tai Chung.)  We stopped in Taipei for breakfast.  I loved the breakfast in Taiwan - the traditional breakfast of 蛋饼 (egg pancake) and 豆浆 (soya bean drink).  There were many varieties of the 蛋饼 in Taiwan, just like our roti prata in Singapore.  I ordered a 肉丝 and a bacon 蛋饼, plus a cold 豆浆.  It was really delicious. 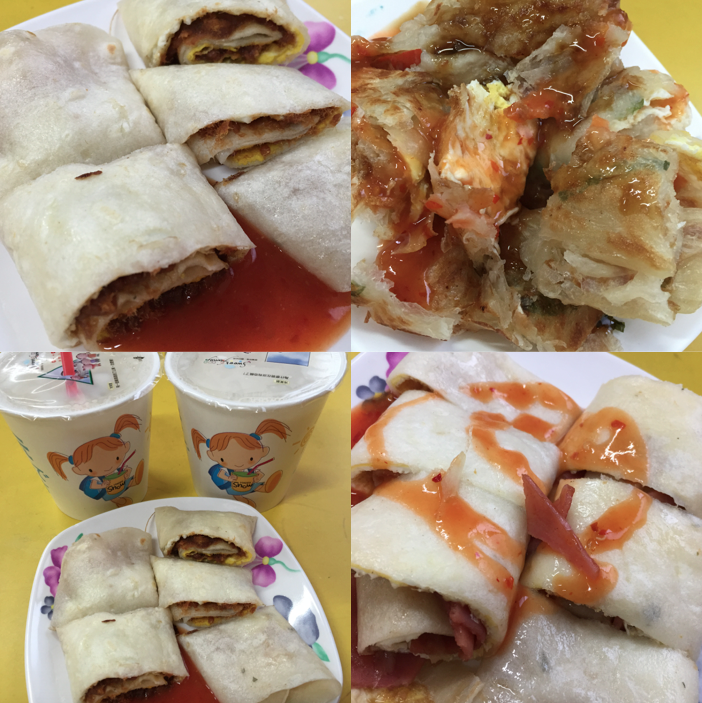 The drive to Tai Chung was about 2 hours.  As there was nothing at the race start/end point, Sam arranged us to visit two local places along the way to Tai Chung.  The first one was the 龍腾斷橋 (the name of a broken bridge with a long history, damaged in an earthquake in 1935) and the other was the old 勝興車站 (old railway station in 勝興).  It was nice to experience the early spring season where the weather was cool.  After the visits, we had early lunch.  We ordered a few dishes to share and I loved the pig's blood as it was not available in Singapore.  After lunch, we stopped at a nearby Family Mart (something like our 7-Eleven) to get our supply of water and food (breakfast) before reaching the race start/end point around 1pm.  The race organiser brought us to the accommodation bunks where there were 5 double-decker beds for us.  Some of us decided to take a nap while waiting for Sam till dinner time as I did not have a good night sleep on the plane.  Sam arrived with Elaine, Gary, Ngah Ling and 邵老师 at around 6:45pm and we left for dinner at 7:00pm.  Dinner was "sponsored" by the race organiser for whatever reason I couldn't recall but it was a good 10-course dinner!  The boiled soup was especially delicious! 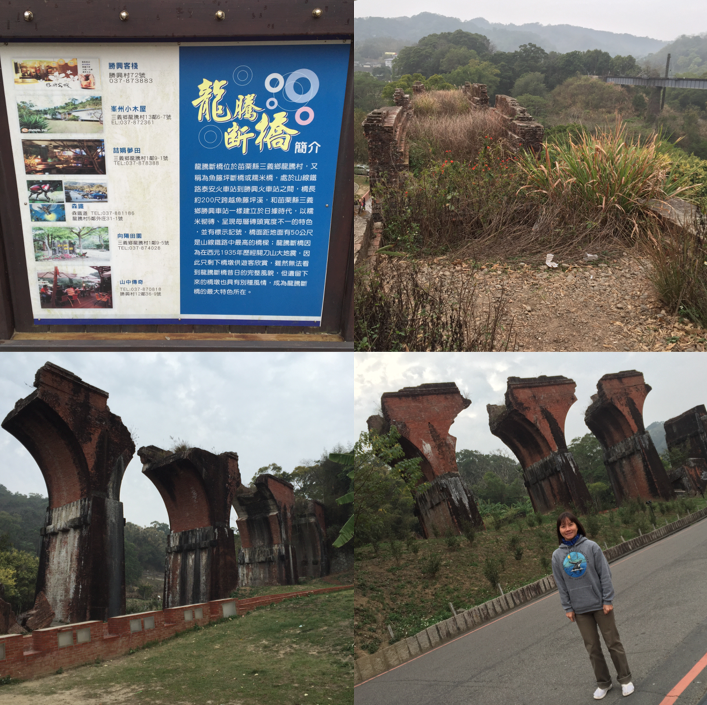 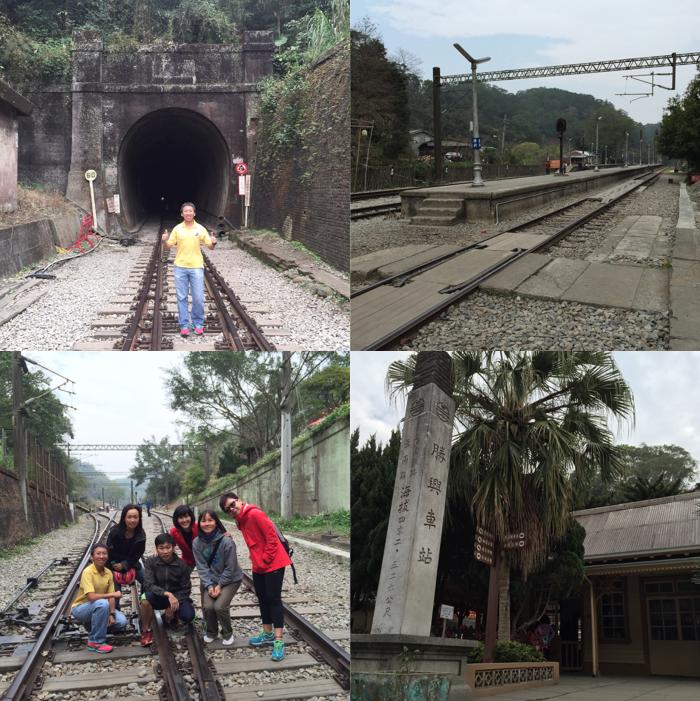 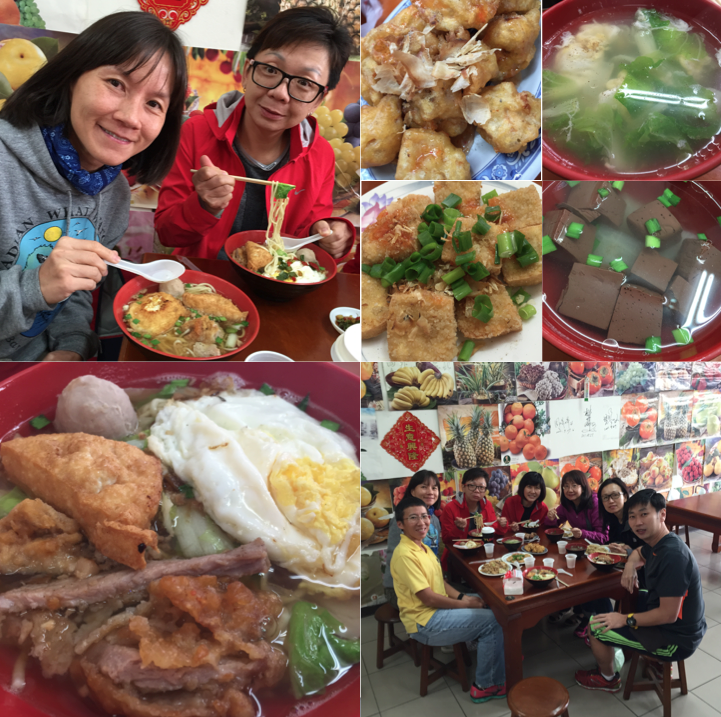 Xinshe Sakura Marathon (新社賞樱馬拉松) 2015
I set the alarm to wake up at 5:15am as the accommodation block was less than 500 meters from the starting line.  But by 4:45am, alarm from the rest of the runners started buzzing and I reluctantly got up to change at 5:00am.  We brought all our belongings to check-in at the baggage deposit in the hall at about 5:45am.  Then we waited at the hall as it was cold outside.  Yes, even I felt cold as well as it was early morning and the sun was not out yet.  5 minutes before the start, we walked towards the starting line.  While waiting for the countdown, I met a guy who recognised me from last year's Sinyi Grape Marathon as I was wearing the same running outfit!  At 6:00am, we were off.

I warmed up nicely once I started running but compared to other marathons I ran in Taiwan previously, this was the coldest.  6:00am was still dark so I had to watch my step as I tend to fall easily.  I told myself to keep running since there was nothing much to see.  Back in my mind, I was hoping to finish within 6 hours, i.e. at 12:00pm, which would leave me with 45mins to bath and get ready for the last bus ride at 1:00pm.  Ideally, I should finish in 5hrs 30mins.  The sky slowly brightened but there was nothing much to see as we were running along streets next to shop houses and homes.  The first km marker I noticed was at the 6km mark.  There were also a few tress with full blossom of sakura!  I didn't stop to take any photos as I felt it wasn't nice enough.  I told myself I would only stop for photos during the 2nd half of the race.  But when I ran past a sakura park entrance just after the 8km mark, I stopped and whipped out my iPhone.  Then I saw Nancy and Celine running towards me!  We quickly helped each other to take photos before continuing our run. 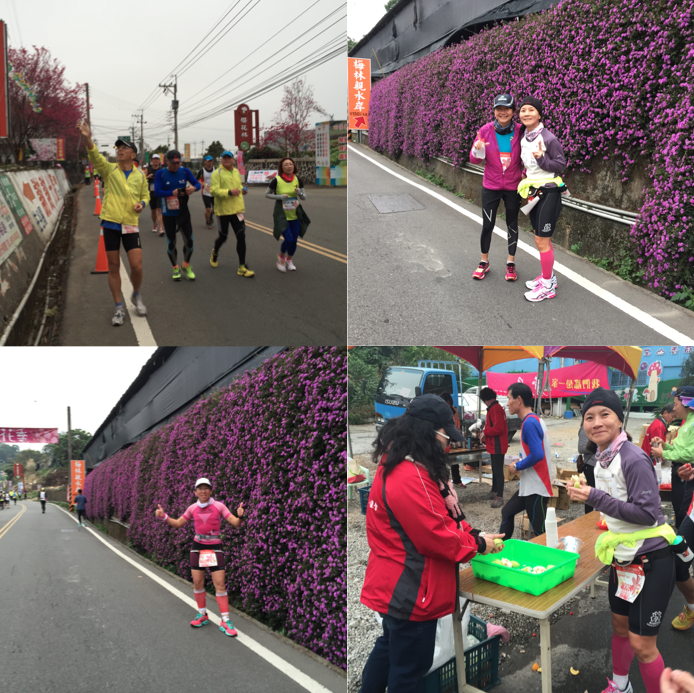 Nancy and I paced each other after that, while Celine dropped off the pace.  I wasn't sure if I could keep up with Nancy as she was usually faster.  At every water station, we waited for each other although deep inside, I hoped she carried on running when I stopped for water so I won't need to put in so much effort to run up to her even if she had slowed down.  Nevertheless, our different drink intake pattern allowed us to stop and rest more.  The regular walk-breaks meant that I had to run hard in order to maintain my core temperature, else I would feel cold.  After the 19km mark, the half marathoners turned right and headed towards the finishing while the marathoners turned left.  Nancy and I managed to keep pace till the 22km mark.  Along the way, I saw food items I never seen before being served: carrot cake (菜頭粿), pancake (蛋饼), almond milk and liquor!  The liquor was especially good as it heated up our body.  After the 22km mark, we were on an upslope and I decided to jog-walk to the top.  I urged Nancy to keep up but she decided to walk instead. 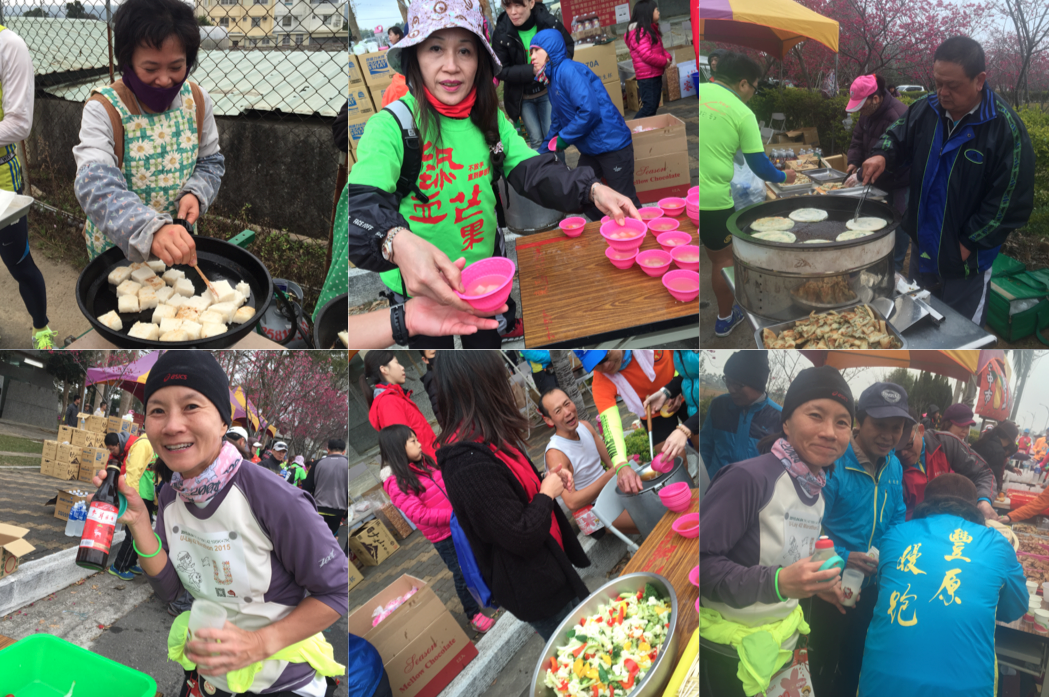 And so, I continued to push myself as whenever I slowed down, I could feel the chilly wind.  I did saw Nancy again when she caught up with me at the water station after the 25km mark.  It was just minutes past 9:00am.  I waited for her to take a picture before I continued to push my pace.  At around the 28km mark, we joined back to the earlier route but running on the opposite side of the road, before making a left turn and merged with road leading to the park where we passed earlier.  By then, I knew I would need to run that part of the same route again.  More food were served along the route but as back of the pack runner (I thought I was already running quite fast), good stuff like the duck meat was almost gone.  Before I made the u-turn at the junction to make my way back, I saw Ngah Ling, Sam, 宝哥 and his entourage of runners.  宝哥 was running his 400th marathon and I wished I could accompany him for his journey.  Unfortunately, as I needed to catch the last ferry service, I passed 宝哥 and subsequently Ngah Ling and Sam.  The last 3km was the hardest as we had to run up a slope but once we summit, it was flat before going downslope.  I crossed the finish line in 5hrs 15mins (gun time) eventually, with Nancy about 2mins behind. 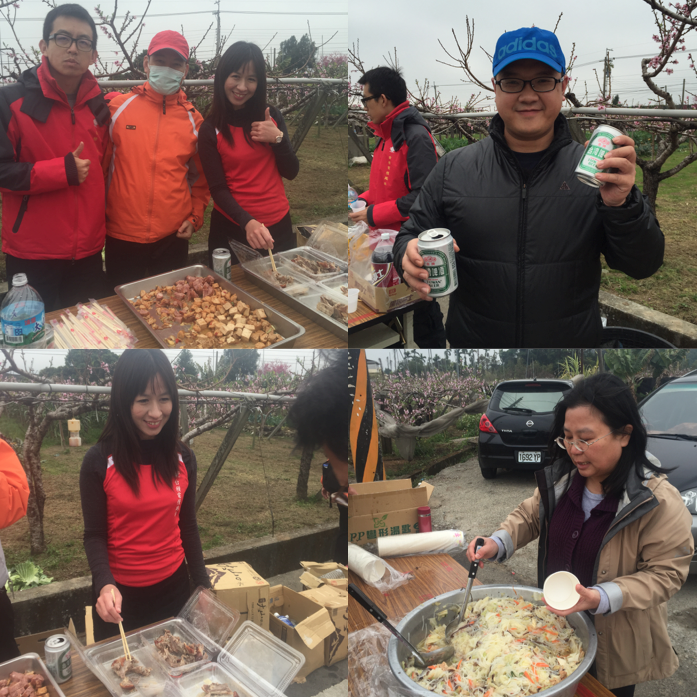 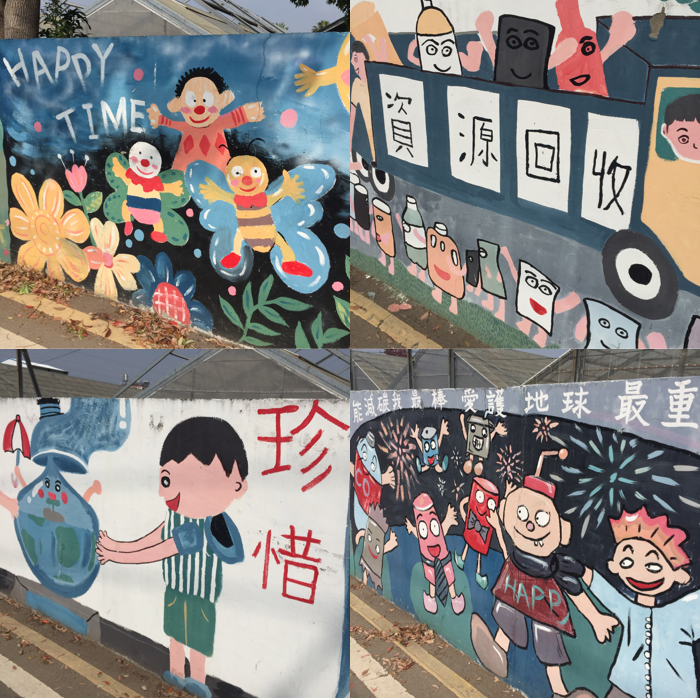 On The Wall: The Reminders On Environmental Issues After 40km Mark!

At the end of the race, I picked up my Finishing Certificate, a goodie bag containing water and a big towel (half marathoners got a smaller towel) , as well as a sumptuous lunch box.  The race organisers also provide hot showers but for those who were too slow like myself, we had to make do with cold showers instead.  I washed up, packed and managed to get ready by 12:30pm, after which Rosemary and I followed Nancy to look for the ferry service to bring us to Tai Chung High Speed Rail Station for the 40mins train ride to Taipei Airport High Speed Rail Station.  We made it!

Overall Verdict: 9/10
I was very pleased with my timing as I had not expected to maintain the 8km/hr pace (7:30min/km pace) at all.  This should be due to the cool weather in early February.  The marathon was very well organised with well-stocked water and food stations situated at regular intervals.  Runners were never left thirsty or hungry and in some instance, never left cold.  Although the route seemed pretty boring in the 2nd half with repeated sections, there were sufficient sakura found along the way for runners to admire.  This was indeed a great race to take part in!  :) 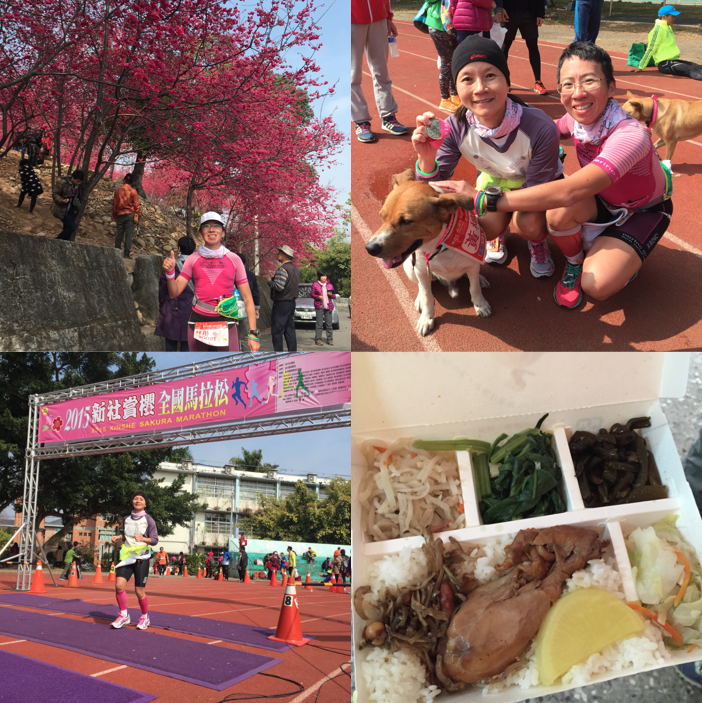 The Last Mile Of Xinshe Sakura Marathon!
Posted by Ripley Runs at 12:23 AM