I couldn't recall when I signed up for the Bedok Ultramarathon but I did so knowing it was less than 4 weeks after Badwater 135.  The reasons for signing up for this race were simple: I want to re-connect back to running in Singapore weather, and also to try to complete the Bedok Ultramarathon, the Craze Ultra, as well as the Monster 200 Ultra (as completion of all 3 races would give the finisher a special award.)  :)  Getting used to running in Singapore weather shouldn't be a problem since I ran more local races this year.  As for completing the 3 ultras, let's just say I loved to put myself in difficult races.  As with any events that I signed up, I had 3 goals in mind: (A) complete at least 80km within the 12 hours, i.e. at least 19 laps, or (B) complete as many laps as possible within the 12 hours, or (C) complete the minimum laps required to qualify for a Finisher Medal.  :)  Sounds like a simple task.  Or so I thought.

On race day morning, I arrived just minutes before the flagged off as I had alighted at the wrong bus-stop.  I quickly deposited my drop bag among the chairs, picked up my race bib, and got ready for the race.  I saw many friends and even more familiar faces, some running and more volunteering.  A few friends and strangers congratulated me on my recent race success but I was too embarrassed to be getting such attention.  Nevertheless, Ben Swee (Race Director) flagged us off at 7am sharp. 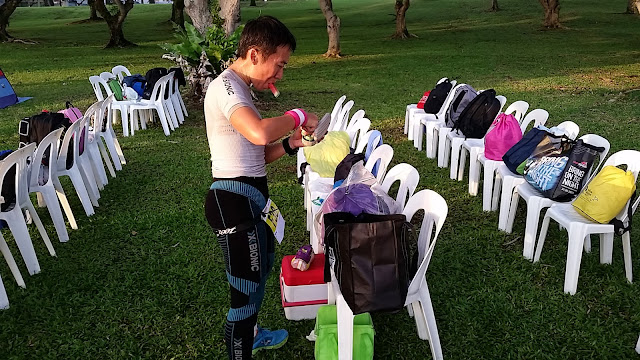 The Transition Area - Where Runner Kept their Race Essential Stuff!

Running in Singapore was a really torturous affair.  At least for me.  While the weather was not as hot as in Lone Pine (Badwater 135), the humidity could literally slow you down to a death march!  Okie, maybe the humidity might not affect all runners but for someone like me, who had problem in dissipating heat from the body, I really needed something like the X-Bionix to help me in cooling down efficiently.  Before I completed the first lap, Angelina already passed me despite starting the race later than me.  She looked so smooth as she sailed past me.  It was depressing.  The weather was great that day in my own opinion, probably because I came across worse weather conditions.  But such great weather didn't translate to good race performance although I was wearing the X-Bionix gear.  Don't get me wrong.  The gear did what it was supposed to do and I could feel my sweat being "channeled" down the respective areas for the cooling of my legs.  For the Fennec short-sleeved shirt that I was wearing, it didn't work in the same way as it did in Lone Pine though it did cool my upper body.  :)  Perhaps it was the humidity. 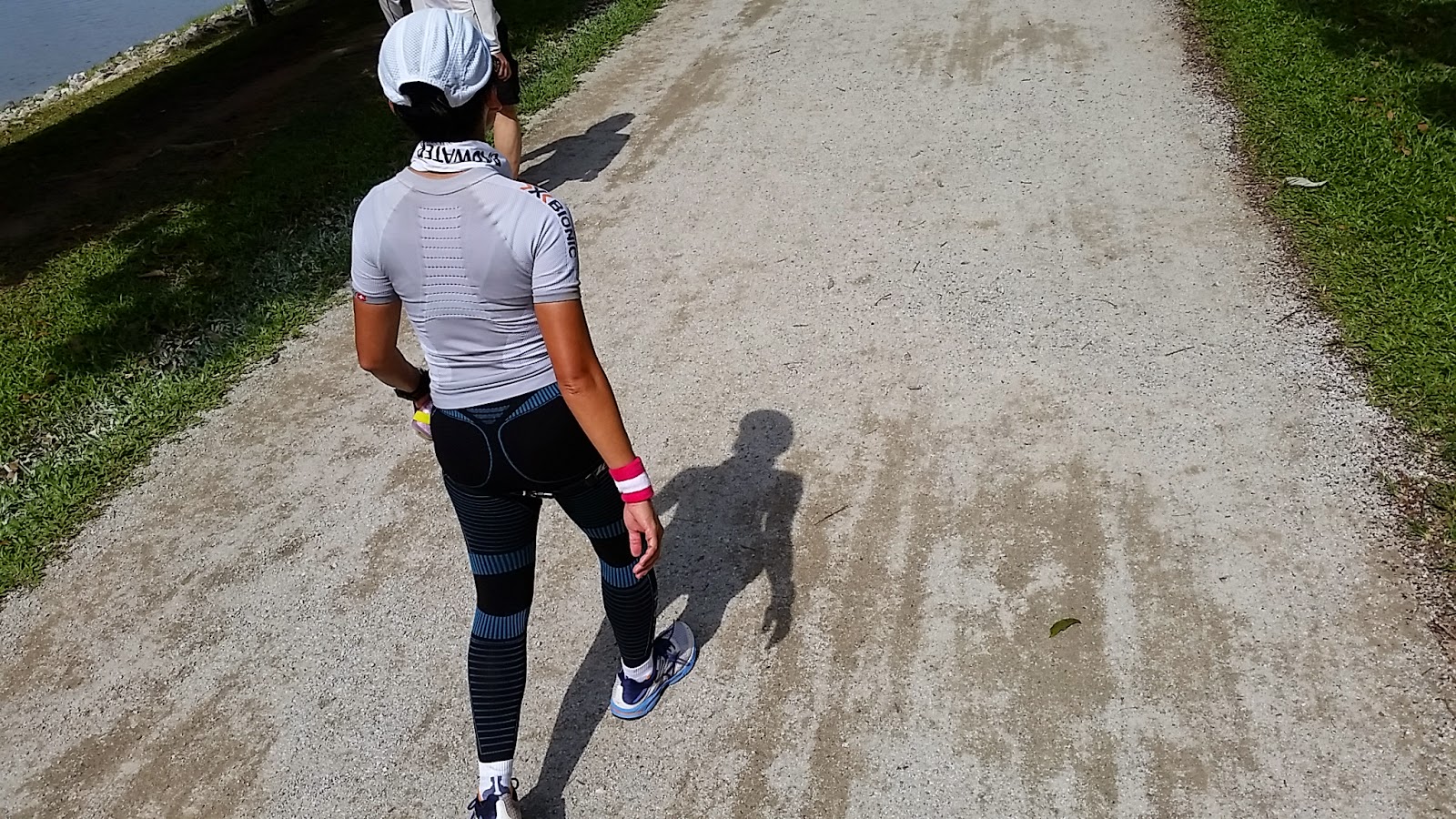 At the 3rd lap, I decided to use my neck cooler which was modified from the one I bought in Lone Pine.  It was Sam's great idea.  (Sam was one of my Badwater crew member and was extremely resourceful.)  The volunteer (can't recall who) helped me fill up with ice before I wrapped it around my neck.  It was cooling indeed but I didn't like the modified version as it was like the original one where the velco was not long enough.  However, the bright orange color was a nice change though the color seemed to come off easily.  Things got better in the next few laps.  When running a ultra, there would always be cycles of ups and downs.  So by Lpa 6, I lost the desire to cover 19 laps and dropped down my expectation to Plan B.  Along the way, I met Juay Seng's young boy who had teamed up with his dad to do the team event.  I encouraged him to run with me and alternate running a 100 steps and walking another 100 steps.  It worked for the young lad for a while but after 2 further sequences of the run/walk strategy, I decided to push on myself or I won't achieve my Plan B.  At the end of the lap, I met Nancy, who had completed 1 more lap than me! 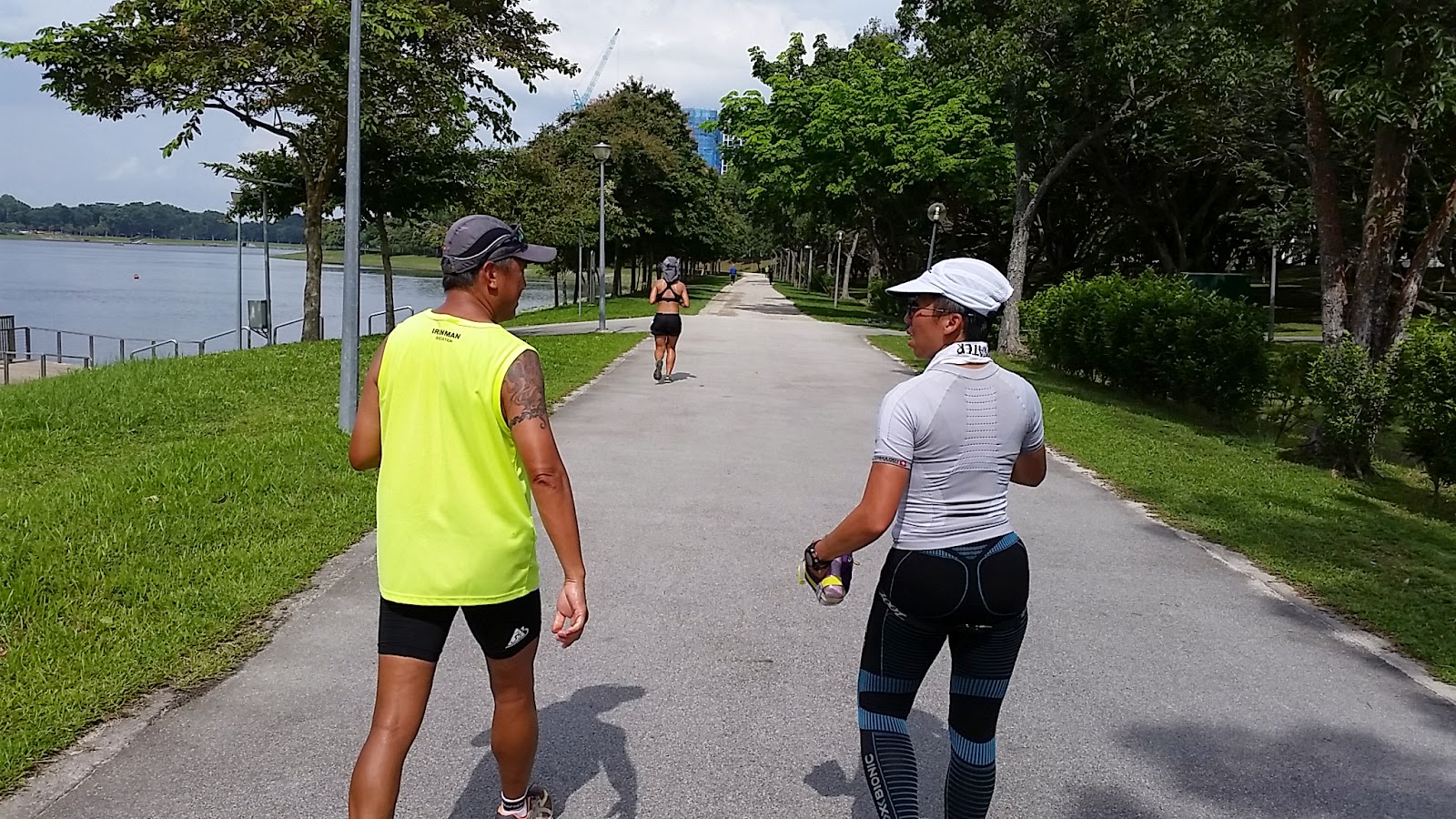 Chatting With Sam - on the Neck Cooler Modification!

After finishing Lap 7, I decided that I would just do the minimum of 12 laps and call it a day.  It was way too humid and the short loops meant that the course was very mental.  I was feeling very bored running alone though there were other runners and park users.  I guessed I was still mentally exhausted after the recent races.  Since there was no need to prove to myself or anyone that I could run a full 12 hours as I had done that before, at the MR25 Ultramarathon and in much difficult terrain, I decided to have some fun in the remaining laps.  I caught up with Ivy and asked if I could run / jog with her.  She was a much faster runner and I thought if I could just hang on near her, I would be fine.  But after just a lap, I had enough of following her pace and decided to drop back into a more manageable pace.  At the Start/Finish Point, I saw Taz who was volunteering for the event and asked if he could pace me.  I had run countless times with Taz previously and he was a great pacer.  He agreed and the next 2 laps were the most fun.  Taz helped to take photos of me and other runners.  I felt more relax and really enjoyed the run.  :) 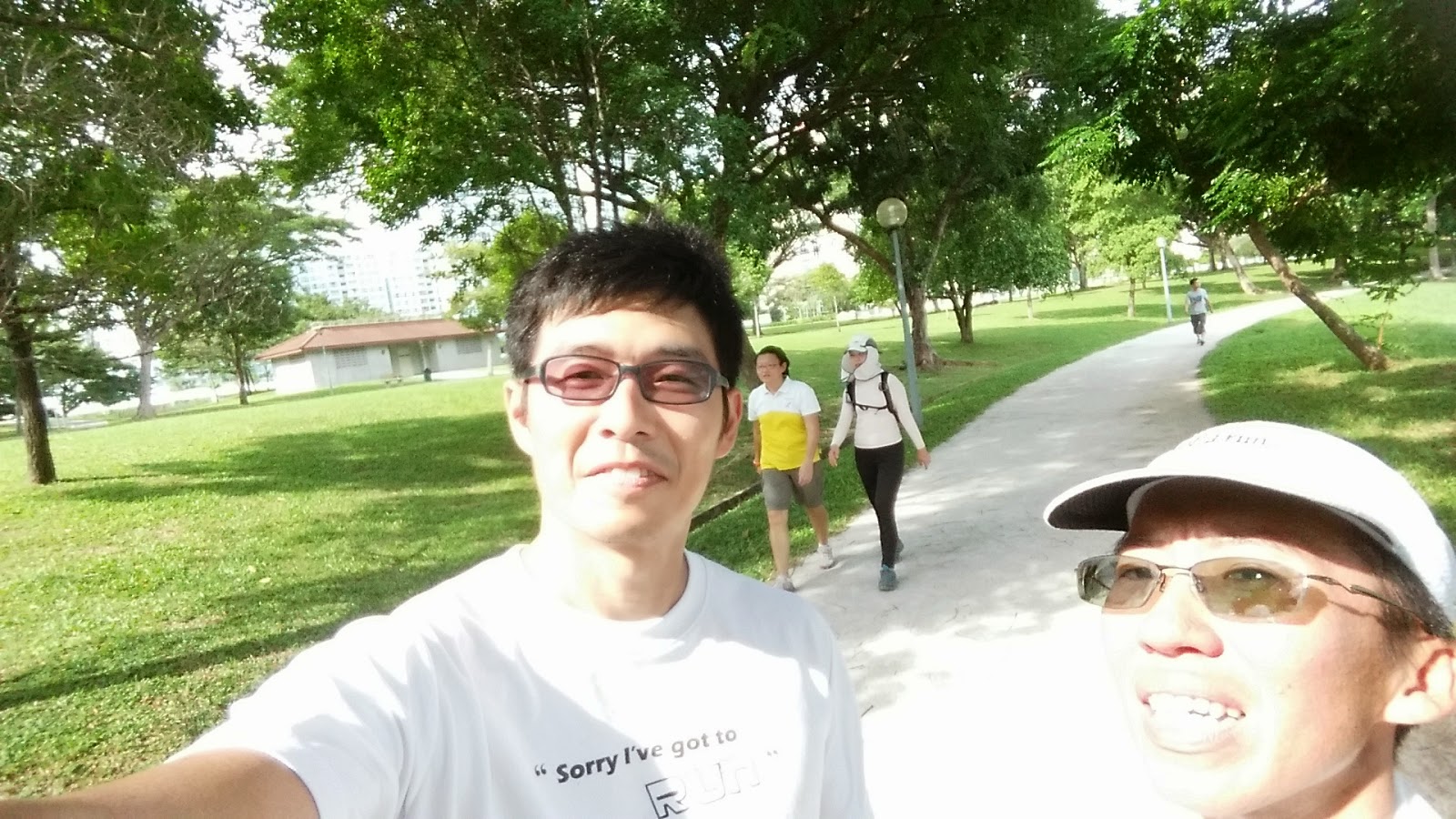 Wefie - Photo with Taz, Ivy and Fennel (Both at Background)!

Our pace were pretty constant, so we leapfrogged Ivy and Fennel (her pacer cum event photographer) whenever they walked and they leapfrogged us when we were busy taking selfie/wefie.  By then, I had also decided that I would complete 1 lap more than the minimum laps to be clocked.  I.e. 13 laps.  It was a real struggle in the last few laps but having someone to pace you really took your mind off the task.  I slogged the last lap and when I saw Esther and Tan Yan, I was very happy to tell them that I was done for the day!  :)  13 laps, 55.9km in 9hrs 32mins 32secs?  It was not a great result but I was one happy runner.

I always enjoyed running such events.  Small field, great support, endless fun throughout the day.  The enthusiasm shown by the volunteers were exceptional though it certainly helped when you know them personally.  I was always looking forward to seeing the volunteers at the end of the lap, and reluctant to proceed for a new lap when I know it was time to get going.  They even had massage service provided to ease the tightness in the runners' legs.  Unfortunately, I was wearing a long tights and was able to escape the "torture".  I was glad to strike off this race from my list of "To-do Races" after missing it out last year.  Now, I look forward to volunteering for the event in the future edition. 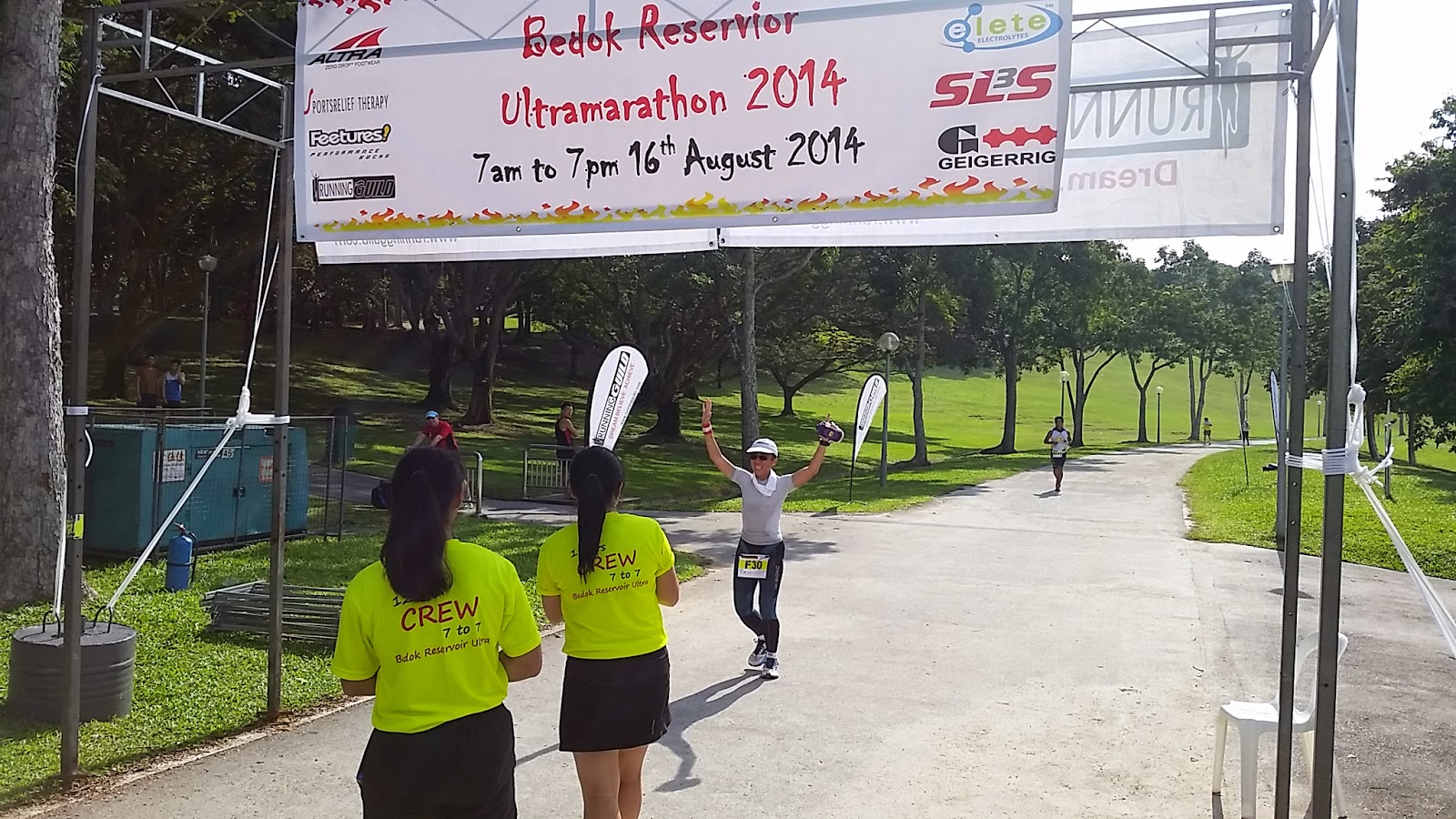 Completion of my 30th Ultramarathon! 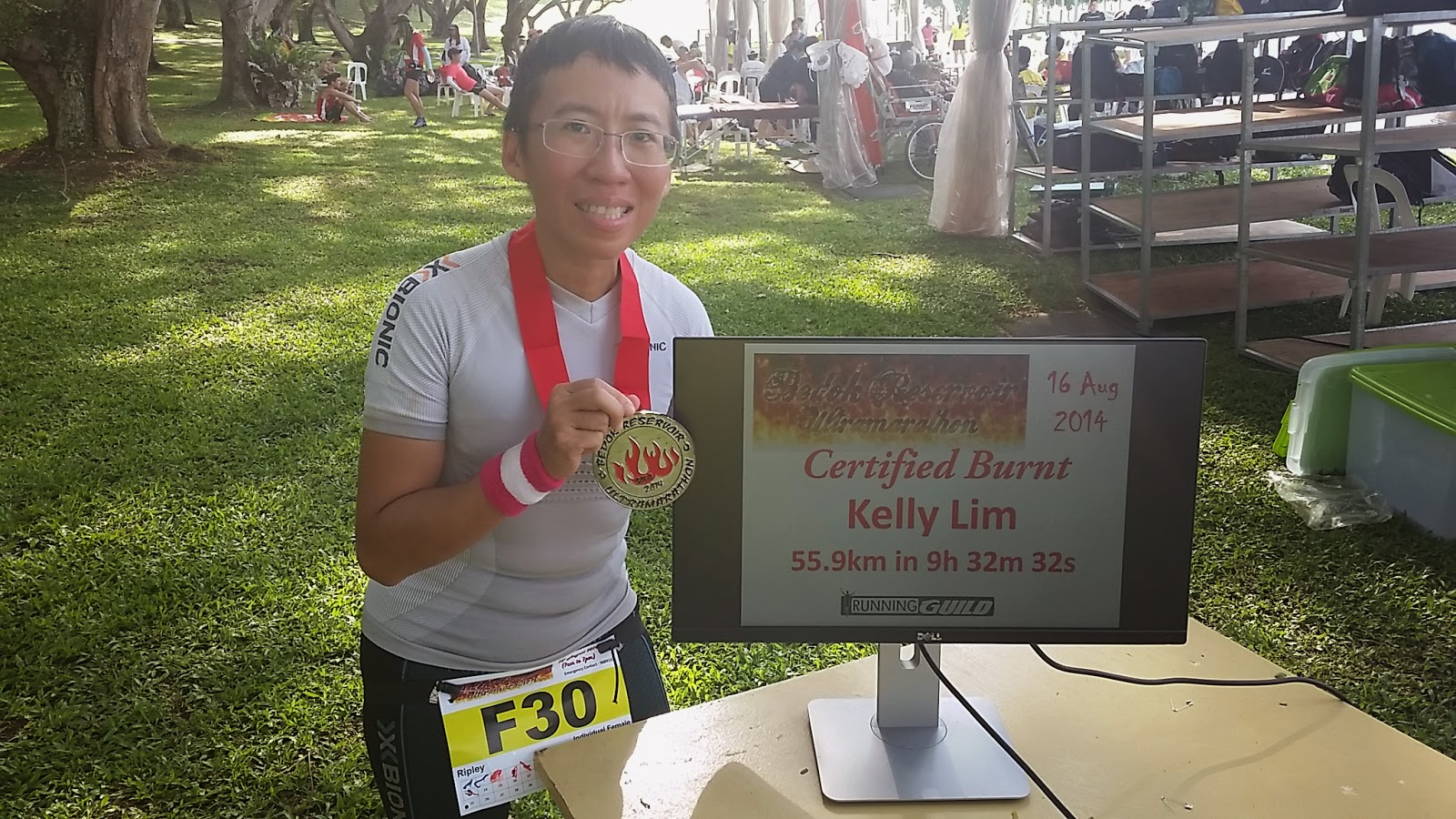 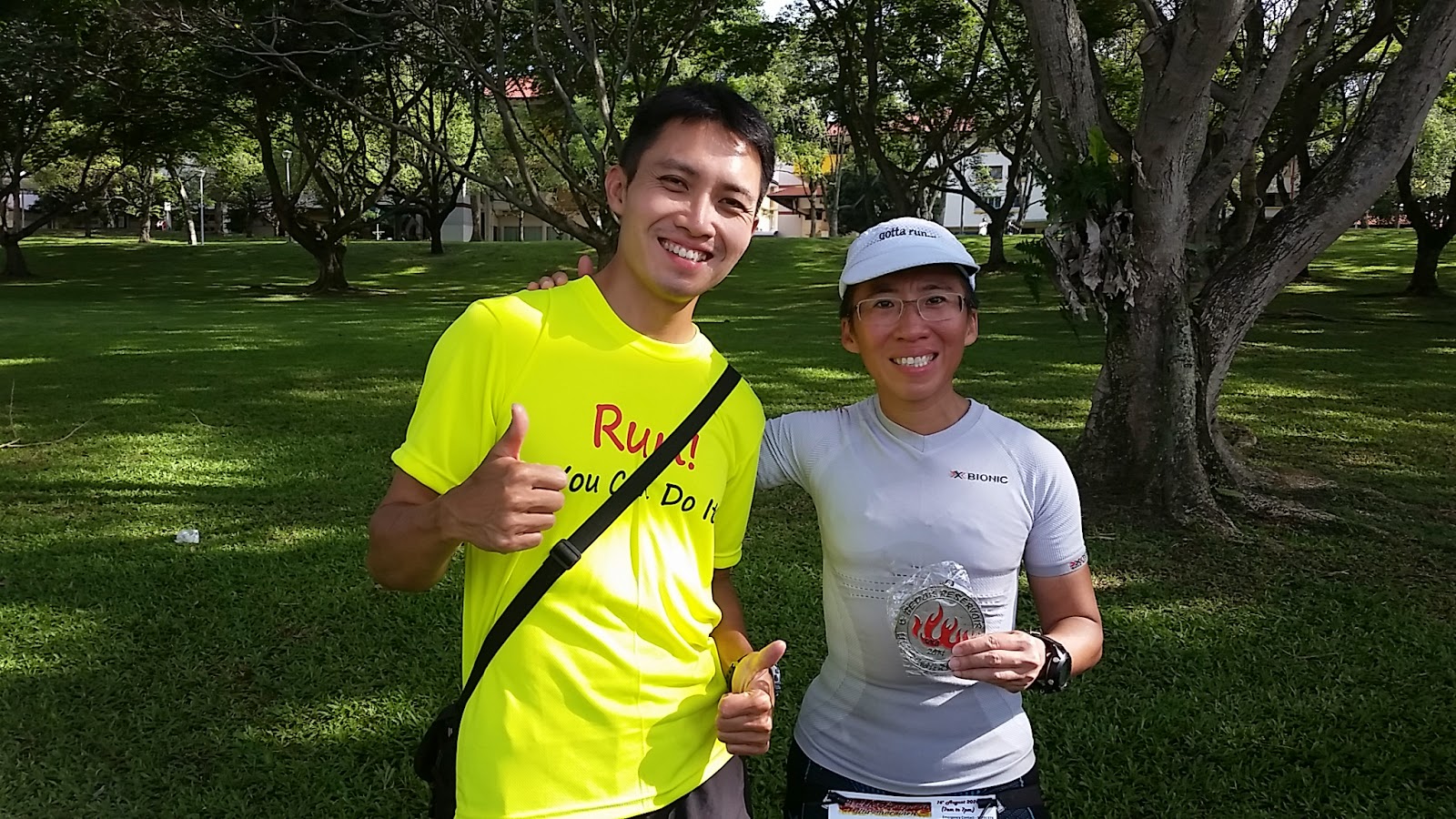 With Race Director - Ben Swee!
Posted by Ripley Runs at 9:21 AM