I signed up for the Salomon X-Trail Run cos I wanted the red color event tee.  Also, this event would be held at the Tampines Mountain Bike Park & Trail, in which part of the it was the official Mountain Bike venue during the Singapore Youth Olympics in 2010.  Though I had ran part of the route before, but none in a race setting.

I arrived half an hour before race start which was at 7:30am.  Met and exchanged some words with Jeri and Shafiqah, as well as some runners from the F1 Runners Team.  The competitive Men's Open was flagged off first before the rest of Men's Veteran, Women's Open and Women's Veteran some 10 minutes later, probably due to the narrow path.  The ground was soft and wet.  The first 2km was tougher than I thought.  It felt more like 5km.  The biggest challenge was the soft ground, muddy areas and the numerous turnings, up and down the slopes.  Though the slopes were not steep, it was not easy to maintain a steady, even pace, especially when some runners tend to slow down on the way up or trying to avoid the muddy spots.  Although the trail was not wide enough for 2 runners to run side by side comfortably, I could still overtake runners if I picked up the right moment to overtake them.  I had my work cut out and I almost twisted my ankle. 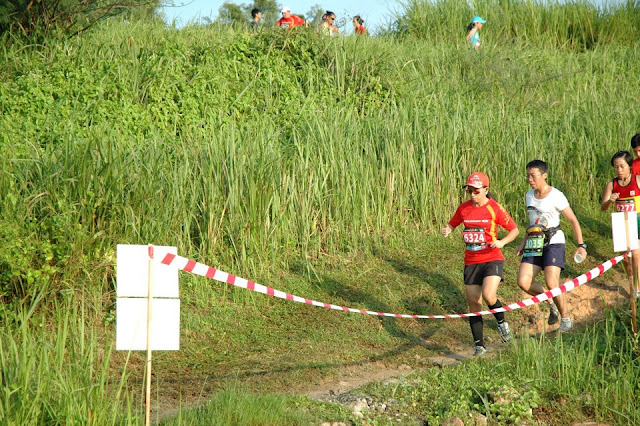 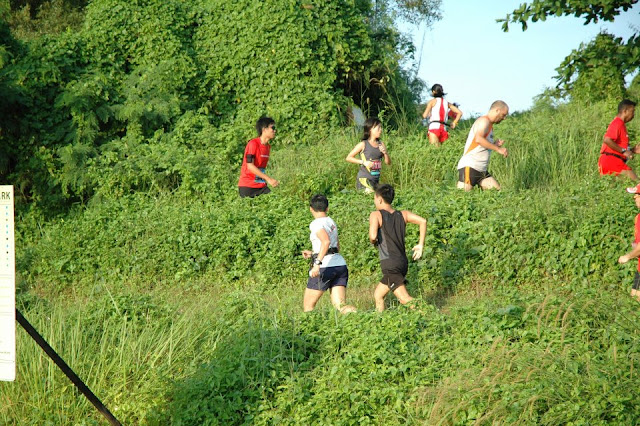 After coming down from the small knoll, we completed a small u-turn before going up to another portion of the trail.  I saw Flip zooming past me!  Then Brokie!  This was also the start of the fun, if running through muddy water was your type of fun!  I was able to run through the muddy area with some care.  But for those area flooded with higher than ankle-high water, I just waded through slowly.  At first, I was kind of sian since I was wearing my newly bought TNF Double Track.  I didn't expect my trail shoes to stay clean but neither did I expect it to submerge totally in the muddy water.  After crossing 3~4 more of such muddy terrain, I was resigned to the fate of having to wash my shoes after the run.  The marshallers were very helpful.  Alerting us to all kinds of dangers like sharp bends, steep slopes, low branches, etc, although some of the description of the dangers were grossly inaccurate.  It didn't seemed to bother them that their shoes would be muddy and dirty by the end of the volunteer work.  They were also very positive and encouraging, urging us to push on.

By the 7km (or 8km) marker, we seemed to come out of the trail but was quickly diverted to another section of the trail.  Luckily, this section was not too long and soon, we came running out onto a big open patch.  Just before the open patch area, there was a clear "stream" and I sort of tried "washing" my dirty shoes in it by stepping hard through it.  But sadly, it was useless.  Cos about 500m from the end, there was another 2 portion of mud bath!  I felt so heavy in my shoes but found just enough motivation to cheong past the finishing line and completed the intense 10km run in 1hr 12mins 54secs and ranked 17 out of 53 Women's Veterans. :)  Given the condition of the trail, I should be happy and satisfied with my result.

After the race, I saw Brokie and Flip near the finishing line.  It's been a long time since I last saw Flip.  We chit-chat while trying to find out if there was any water-point nearby to get ourselves cleaned up - another friend shared with us where he washed up and we quickened out steps towards the direction.  There were a few queues but we queued at the longest one as the water of the tap was the strongest!  We didn't have to wait long for our turns.  After washing up, we all looked cleaned enough to take public transport home.  :)  While this race was not easy, it was lots of fun (at least for me) to run through so many obstacles.  I enjoyed myself tremendously though I might not run this race again. 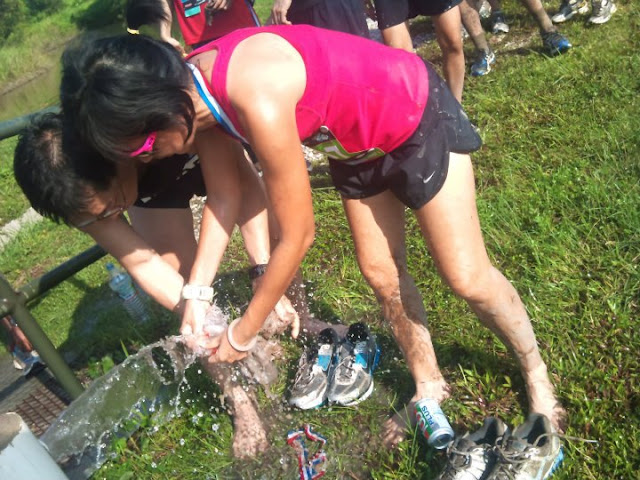 Brokie: Time To Do Some Washing! 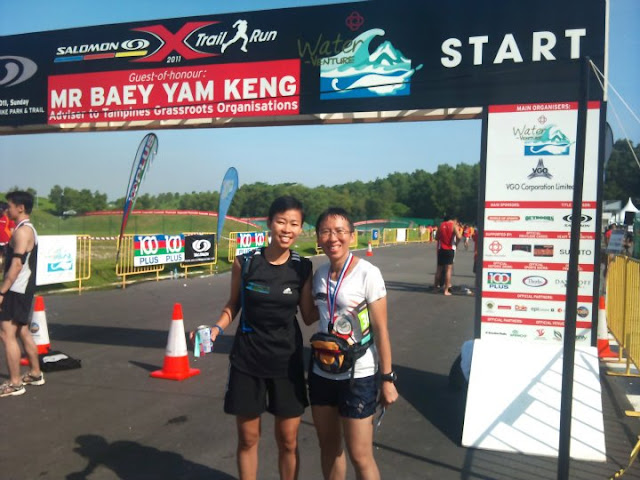