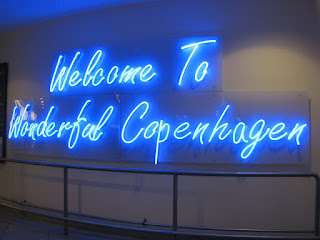 This was my first trip this year which I travelled alone. I arrived at Copenhagen on 16 May Friday. It would be my 4th time running in Europe, having previously ran in Rome, Florence and Milan last year. The weather was cool and unlike Italy, most Danes speak wonderful English. I bought a 1-day Copenhagen Card which allow me to travel free on most public transport less the journey to the airport, as well as free entry to almost all the museums and attractions in Copenhagen! It was also valid for discounts for many other outlets as well. So after visiting 2 of such museums, I went to the marathon expo which was situated quite a distance away. The only way there was to take their public transport. Armed with a local map of the Copenhagen area, I quickly located the buses that ply along the route - it was that easy finding your way around Copenhagen! The bus came and I boarded, showing the driver my 1-day Copenhagen pass. In Copenhagen, they have a wonder public transport lanes - drivers of automobiles had their own lane and cyclist had their own as well, including the traffic lights! Perhaps Singapore should take a look and understand finally that with it would always be difficult for cyclist and pedestrian to co-exist although in Copenhagen, it was more due to the fact that there were many more cyclists than pedestrians. 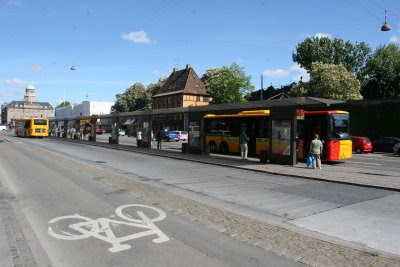 When I reached the expo, I saw the organisers flagging off the runs for the kids of various ages in the open ground next to it. Its a good concept. The parents who would be participating in the main event, i.e. the marathon, would be able to bring their kids for their event on Sat and the kids could support their parent(s) when they run the marathon on Sun. The expo was crowded. I went to the counter to make payment. The total cost is Danish Kroner 560, which is about S$160.00!!! So expensive!!! After paying, I went to collect my runners kit. Unfortunately, they do not have enough event tee-shirt for the size I requested and I had to leave my name, address and bib number with the organiser so that they can mail it to me when they receive the sizes. I thought this was a very good service as we would be able to get a event-tee that we could wear. It is time that the event organisers in Singapore learnt from them! 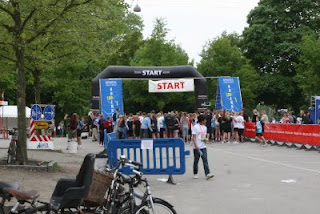 I visited all the booths in the expo. There were many good deals and I bought their Danish brand of power gel at Danish Kroner 40 for 3 packets, which was about $12.00. It was a good deal although not a good idea to try new stuff, especially when it comes to food. Since I always had a strong stomach, I decided otherwise. Out from the expo, I got myself a plate of pasta at Danish Kroner 35. It was just a normal plate but the sauce was tantalisingly great! Or maybe I was just plain hungry after walking for the whole day. :p I went back to the hotel to get ready my running gear and also to rest after walking almost the whole day. 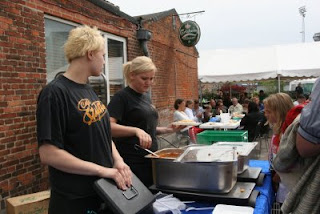 ********************
Woke up at 7am and went to the hotel's lounge for breakfast. Its hardly possible to do this when you signed up for events in Singapore since the weather would be too hot if the event were to start at 10:30am, the starting time of the Copenhagen Marathon. After breakfast, I went back to my room to bath and changed into my running gear. Also watched some TV till about 9:30am, before I took my digital camera to go to the start point, which was about 1km away. Along the way, saw many other runners. It was slightly overcast and I was worried that it might rain as I'll be running with my camera. The wind was strong and cold so I hid myself behind a building with many other runners. While hiding, saw some runners placed their "special" (personal) hydration drink at a box. This was really unique, which I saw previously in either the Rome, Florence or Milan marathons in Italy, Europe. 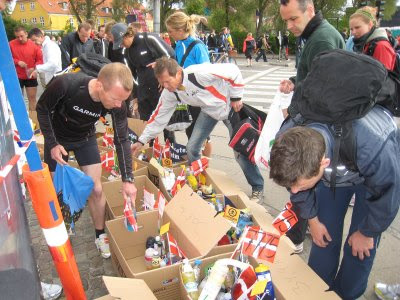 The race was flagged off at 9:30am sharp. The first loop is 26km and runners would run past the starting point to start the second loop which is another 16km. Although I managed to run a 4:44 in Milan 07 and 4:40 in Tokyo 08, I was nevertheless, not expecting another sub-5. I started off easy but somehow, I managed to hang on to the 4:30 pace group until just before the 24km marker which I was unable to maintain at their pace. This was kind of demoralising as I was running at a faster pace in Milan where the 4:30 pace group overtook me at the 36km marker. After consoling myself, I decided to take it easy. At the 26km marker, we ran past the start point again. The remaining route was familiar although the effort was getting harder. I stole a look every time I ran past a km marker. Seemed that I could still do a sub-5 marathon! At the 40km mark, I looked at the timer stationed just beside the km marker and it showed 4:31. I was surprised but thrilled. I gathered all the strength that I left and picked up my pace. Crossed the finishing line with a gun time of 4:45 though I was not sure what would be my chip time. I could only pray.

The volunteer gave out the finisher medal and a stalk of rose to all female runners. It was a very nice gesture and I managed to receive one as most of the time I looked too boyish. :p They also set up tents and served yogurt and beer for the finishers just after you had collected your medal. How cool was that right? After I returned my timing chip, I took a slow walk back to the hotel. Happy that I managed to maintain my form for another sub-5. Afternote: The results on the event website listed me as the 938th female finisher out of 1235 female finishers. I did get a PB of 4:39:55 (chip time) as well. Just 6 seconds faster than the 4:40:01 (chip time) achieved in Toyko Marathon! I was so glad that I did not stopped to take picture along the way. Neither did I try calculating if I could make it when I past the 40km marker. I suspect I would miss making the record since I know its quite impossible for me to cover the last 2.195km of a marathon in 14mins. I was glad I did it. 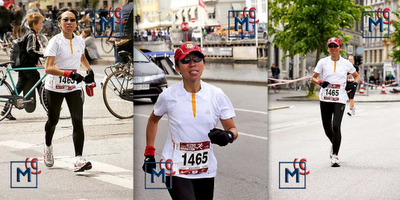