Woke up almost every hour the night before the marathon. It's not about the anxiety but rather, the need to hydrate myself. Had breakfast at around 4:45am and when straight back to nap. Finally woke up again at 6am. Checked the weather. Great. No rain. Quickly showered and put on my running gear, and went to the hotel lobby to wait for the shuttle service to the Baltimore Convention Centre, which was near the starting line. But once I stepped out of the hotel, I realised that it was going to be cold. The wind was rather strong and I was shivering a little.

The route to the Convention Centre was slow due to the restricted traffic. Reached the starting line at 7:30am and I went straight inside the stadium's toilet to get away from the wind! There were also other ladies in the toilet. Some queueing for toilet, some doing stretches. Very obviously, most of us were inside to keep ourselves warm! I left the toilet at 7:55am. The atmosphere was great and the number of participants were just nice. No one tried to push each other to get nearer to the start line, unlike the AHM event back home in Singapore.

Soon, the race started at 8:00am sharp. I was running with the 5:15 pace group. Actually, I wanted to sign up for a 5:45 pace group but the slowest pace group were 5:15. I told myself I'll try my best to keep pace as long as possible. Everything seemed ok for the 1st hour. I managed to cover about 5 miles and I was consistent for the next 3 hours, where I covered 15 miles. The scenary was good although the wind in certain part of the route was very strong. In the 4th hour, I slowed down a little to cover 19.5 miles in total. It was also at the same time that I lost pace trying to keep up with the 5:15 pace group. Nevertheless, I managed to reach 23 miles by the end of 5th hour. By then, I was quite contended to know I could finish within my original target of 6 hours and completed eventually with a timing of 5 hours 42 minutes and 16 seconds.

It's very satisfying that I managed to complete yet another marathon, although I knew I could have done better. Nevertheless, it's my best timing for 2006 and nothing's going to take this achievement away from me. : ) Besides, this was the 1st part of my marathon trip. Another great excuse and another 2 more marathons to go in the subsequent 2 weekends. 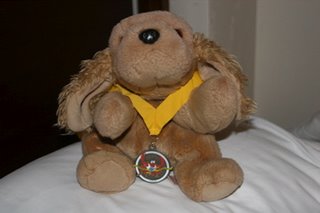