2005 was a very fruitful year for my running. I set out to complete 6 marathons and I did just that. It is always easy to set an easy goal and achieved it or set an extremely difficult goal and gave excuses why you failed. I can't remember how I came up with that magical number 6, but I just did. I reckoned if one can do 7 marathons in 7 continents over 7 days, then running 6 over a period of 12 months was a very achievable goal. The Khon Kaen Marathon was held on 23 Jan. It was the 1st of my 6 marathons. It was upon Jason's recommendation that I decided to take part. I was glad to see Jason again, as well as Sirivahn, a fellow runner from that I got to know through Jason. Jason also helped to arrange for hotel accomodation at the Princess Hotel. After we checked-in and rested, we visited one of the region's favourite sight-seeing - King Cobra Show along with Jason's friends. It was quite an interesting show performed by the owner and his young son. 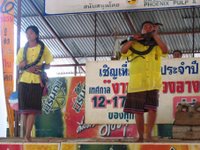 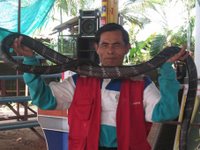 After watching the show, Jason's friends decided to drive up further north for more sight-seeing. Jason, his local friends and me decided to go for a carbo-loading lunch. (He said that some might wake up in the middle of the night after a super heavy carbo-loading dinner. This would disrupt one's sleep. A better option would be to carbo-load during lunch and then eat a normal dinner). We ate a variety of dishes including the famous sticky rice. Yum-yum... 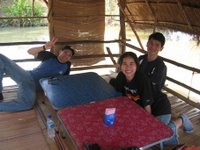 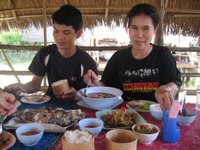 On the morning of 23 Jan, I woke up early to have my breakfast. After meeting Jason at our hotel lobby, we took the free shuttle provided by the hotel to the start of the marathon - the Golden Jubille Convention Hall @ Khon Kaen University (which was also where the finishing line was). It was a cool morning around 4am. And runners started streaming into the starting point by the numbers. Some chit-chatting, some warming up. Some looking dead serious, some looking calm. By 4.30am, I'm ready as with the rest of the runners, raring to go. 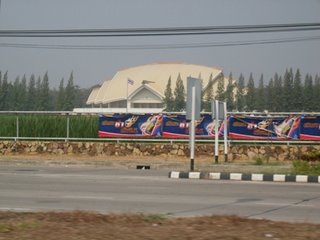 The sky at 4.30am was dark but the weather was great! I didn't really train for the marathon so I told myself to go at the right pace instead of pushing too hard for a PB. The support along the course was great. There's about enough water stations, some with fruits, iced towels, etc. Even the public were in full force to cheer us along the way (except while running along the highway).

But soon, I began to drop back further and further behind. Well, I'm here in Khon Kaen for a short holiday and I'm here to visit the province. So what's the rush - I told myself. The only problem of a back-of-the-pack runner was that in Khon Kaen, when you were still running after 5 hours, chances were that you'll be breathing air which was dusty! My other challenge was not to let Jason waited too long for me. By 9:45am, I thought there was a possibility of breaking my own official PB (5hrs 27mins set in the Quebec City Marathon in 2002). So I gave myself a final push.

Still, I wasn't quite able to match that as the weather was getting the better of me. My mind eased off towards the end. I eventually finished in a net time of 5hrs 32mins 43secs and there was Jason, stretching out his hands to present me the Finisher Medal when I crossed the finishing line! It was mission accomplished and a job well done - 1st marathon of 2005 and my 3rd fastest since I took up marathoning in 2001. All these achieved in the beautiful city of . 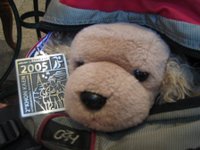